A father’s rescue video of his son buried in snow has gone viral and has become a warning for all skiers.

Winston Goss was skiing between trees with his son Ethan at Brundage Moutain in Idaho last weekend when Ethan lost control and wiped out.

In the video, Ethan can be heard screaming and Goss quickly jumps into action. He follows the screams to where only Ethan’s right arm was visible.

Goss pulls his son out of the deep well of snow and Ethan can be seen trying to catch his breath after being pulled out.

“I am so happy that I was above you,” Goss said in the video.

April Whitney, the communications director at Brundage Mountain told KTVB News that “the snow surface around the tree will rise up and it’s easy if you ski too close to the tree well to slide down into that tree well and it can kind of suck you under.” 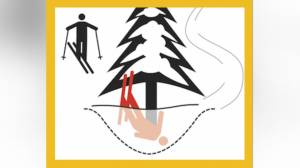 “We tend to think of the tree well hazard when we’ve had big storm systems come through. Maybe a foot or more of powder and those tree wells can really become dangerous,” Whitney said.

She also said the video will serve as a reminder to skiers to be cognizant of the dangers of tree wells and to practice basic ski safety guidelines.

Five people have died in tree well accidents this season in North America according to The Northwest Avalanche Institute.