Reality check: Harper boasts about Canada’s record on refugees, but gets some things wrong

WATCH ABOVE: How many refugees does Canada accept every year? Global News looks at the what Stephen Harper said this week and how Canada actually ranks in the world.

As the image of a dead toddler on the shores of a Turkish beach reverberated this week, Conservative leader Stephen Harper defended Canada’s record when it comes to aiding displaced persons.

“Canada is the largest per capita receiver of new immigrants in the entire world,” Harper said Wednesday.

“And we have resettled already some 20,000 Iraqi refugees and a couple of thousands of Syrian refugees and we plan to do more.”

The second half of that claim is correct, but misleading: Canada has resettled about 20,000 Iraqi refugees in the past six years, and about 2,000 Syrian refugees since 2013 — and the majority of those have been privately sponsored.

READ MORE: How do Harper’s Syrian refugee statistics add up?

The first half is just wrong, however.

For one thing, Harper referred to immigrants, rather than refugees.

But even if you count all immigrants, Canada isn’t “the largest per capita receiver … in the entire world.”

Canada accepted roughly 250,000 immigrants in 2012, a significant number but less overall, and less per capita than Germany which took in 965,000, according to the OECD.

How does Canada stack up when it comes to refugees?

It sounds good. But that’s a tiny proportion of the world’s refugee population: less than 1 per cent, actually.

“Resettled refugees” only refers to refugees transferred from an asylum country to another country that has agreed to take them.

Most refugees don’t get that lucky: They flee their homes and end up anywhere that will take them. Many remain displaced within their home country; others make it elsewhere, and countries have a legal obligation to people seeking asylum within their borders.

If you look at all refugees, Canada ranks 41st in the world, with 4.2 per 1,000 inhabitants. That’s far behind not only Lebanon and Jordan, but Sweden and Malta as well: 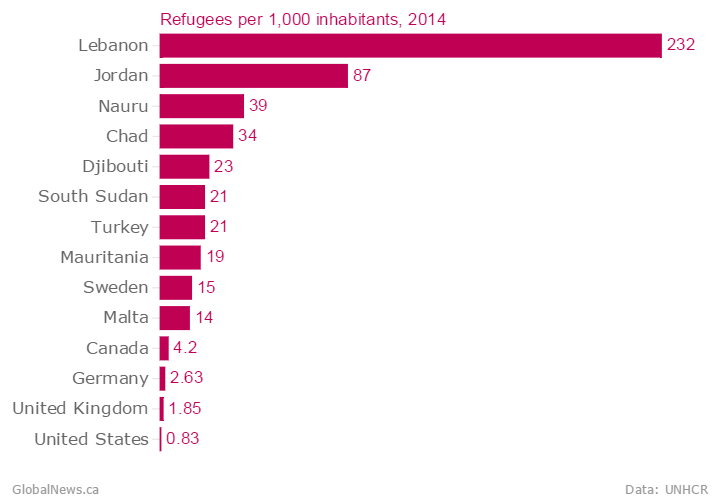 “It’s misleading to be just focusing on resettlement as a way of excluding from consideration all the many many countries that are receiving way more refugees than Canada,” said Janet Dench, Executive Director of the Canadian Council for Refugees.

It’s impossible to apply to come to Canada as a refugee in your own country (you need to be in another country first) but if you apply for a student or tourist visa in your own country, you may be refused if a visa office thinks there’s a good chance you’ll apply for refugee status once you’re here.

Wait times for people applying for refugee status can stretch months or years.

“Canada, because of its geographic location and also because we work very hard through interdiction measures to prevent refugees from getting to Canada, we have few refugee claimants,” Dench said.

“We’re sitting in a position of privilege and we have very few refugees that are here. So to be boasting about how generous we are because we’ve picked a small drop in the ocean … is, I think, somewhat offensive.”

REFUGEE HEALTH CUTS: Even those who qualify get turned away

“The whole smuggling industry is really propped up by governments like Canada’s who prevent refugees from getting here.”

And while many Canadians have been horrified by the images of Alan Kurdi and others like him, Dench says few people really understand how Canada’s refugee system works or how tough it can be to get here.

“I’m constantly talking to people who are absolutely amazed to understand that Canada refuses people access to Canada,” she said.

“Canada has a moral obligation. And … we believe that it is part of the better aspect of Canadian tradition and identity to want to welcome refugees.”