On terror rhetoric, Public Safety Minister ignores RCMP and his own advisors

Public Safety Minister Steven Blaney’s office ignored edits that would have toned down a counter-terror statement issued in January, according to a document obtained by Global News.

Instead, the statement, issued Jan. 26 in response to an ISIS audio file calling for attacks on Canada, used language Canadian law enforcement has called “inflammatory.”

An e-mail obtained through an access-to-information request includes edits to a statement that replaces “jihadist” with “terrorist” and “declared war on” with “threatened.” 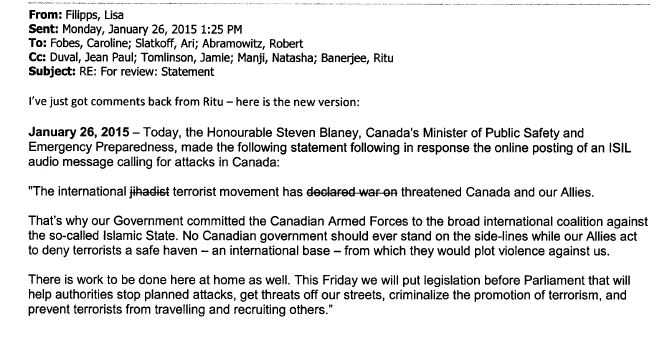 The statement released online doesn’t include those edits, however.

When Global News asked why the edits weren’t made, and whether there’s concern this language could alienate people, we received this response:

“The international jihadist movement has declared war on Canada.

“Canadians are being targeted by jihadi terrorists simply because these terrorists hate our society and the values it represents.

“The Anti-terrorism Act, 2015, will provide our police forces with the tools and flexibility they need to protect Canadians against serious and evolving threats from terrorist organizations like ISIS.”

The federal government has come under fire for its counter-terror rhetoric, which has focused almost exclusively on Muslims and jihadist terrorism.

According to a 2012 RCMP report, using language similar to that employed in the release is a bad idea.

“Distorted and inflammatory linkages between Islam and terrorism can serve to convince Muslims — both in the West and in the larger Islamic world — that the West is, in fact, their enemy.”

And using the term “jihadi” as shorthand for “terrorist” actually validates extremist messaging, the report says.

“Jihad … describes the effort to live in the way that God intends for human beings and to find the inner will and discipline to live according to the basic tenets of Islam,” the RCMP report reads.

“By referring to extremists as jihadis we effectively recognize their actions as being in the path of God and, therefore, legitimate. And in opposing jihad and its practitioners, we risk characterizing ourselves as the enemies of Islam.”

The National Council of Canadian Muslims has communicated its misgivings on terror terminology to the federal government, says Amira Elghawaby, the council’s communications director.

“It’s disappointing that the minister did not accept the edits from his public servants,” she said.

READ MORE: Are you already violating the feds’ anti-terror bill?