TORONTO – Nearly half of the world’s population will be online by the end of 2015, according to a new report. The International Telecommunication Union (ITU) predicts 3.2 billion people will have access to the Internet within the year – two billion of which live in developing countries.

The report, released by the United Nations agency Tuesday, found that Internet penetration has skyrocketed from about six per cent to 43 per cent of the global population since 2000.

Fifteen years ago, there were just 400 million Internet users worldwide, by the agency’s estimates.

However, the ITU noted more than four billion people in the developing world are still offline.

Of the nearly one billion people living in what the agency describes as the “least developing countries” or LDC’s – including Somalia and Nepal – 851 million do not have Internet access. 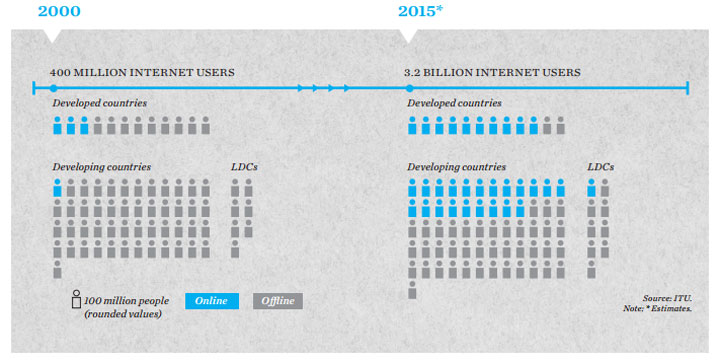 “These new figures not only show the rapid technological progress made to date, but also help us identify those being left behind in the fast-evolving digital economy, as well as the areas where information and communication technologies (ICT) investment is needed most,” said ITU secretary general Houlin Zhao in a press release.

The study looked at the growth of the global information and communication technology sector over the past 15 years.

Not surprisingly, 3G Internet access (or mobile broadband) is the fastest growing market for Internet. The ITU estimated there will be more than seven billion mobile device subscriptions by the end of the year.