TORONTO —  A Kickstarter campaign aims to preserve a piece of our history, one signature family recipe at a time.

The Grandmas Project is the brainchild of French filmmaker Jonas Pariente, who hopes to find other filmmakers willing to share their grandmothers’ cooking and stories. It’s what the 32-year-old originally wanted to do with both of his grandmothers.

“The Polish one died a few years ago and so I didn’t get a chance to film her doing the recipes I love so much,” he says. “Since I have my other [Egyptian] grandmother still alive, I said, ‘I can’t let that opportunity go.'”
Story continues below advertisement

He has since documented his “Nano” whipping up molokheya, a traditional Egyptian beef stew, while talking about her life as a young woman in Cairo. He’s now looking for grandmothers around the globe, and says he’s already received interest from places like India and Brazil.

Pariente’s plan is to take 30 of the best videos and stories he receives and gather them “into an interactive website where you will be able to navigate through the ingredients of the recipes, the geographic location of the grandmas, the languages they speak and the historical events they witnessed.” 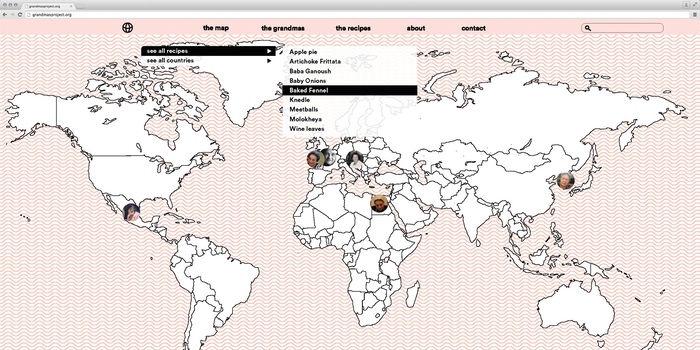 He has set a fundraising goal of $20,000 (with over two weeks to go, he’s reached just under half of that), the majority of which will reportedly be spent on the creation of the interactive site and post-production of the 30 videos.

In the future, he hopes to open up the project even further, allowing anyone to add their grandmothers’ photos, recipes and stories to the site. He’s currently in the process of securing sponsorship from UNESCO, a protector of world heritage — something he believes lives in our grandmothers’ cooking.

“When I eat at my grandma’s, I feel like I’m in Egypt. And when I ate at my other grandmother’s, I use to feel like I was in Poland. And even though she’s not here anymore, I can repeat her recipes or buy the same ingredients she used to buy and still have this part of my identity,” he says.

“Even my son who has never known my Polish grandmother, I will be able to pass that on to him.”

Pariente is not the first person to do something like this. Last year, multimedia journalist Caroline Shin raised more than $11,000 for her ‘Cooking with Granny’ web series “featuring awesome grandmas sharing family recipes for traditional dishes from all over the world.”

WATCH: Friends Matteo Agostinelli and Mathew Foulidis also teamed up to create the cook book, From Nonna with Love, inspired by their grandmothers’ recipes

Do you have a favourite dish that your grandma makes? Share the recipe in the comments section below!