TORONTO – The National Oceanic and Atmospheric Administration has released a new finding: that global greenhouse gas concentrations have reached their highest levels since record keeping began in 1958.

The levels have topped out at 400 parts per million (ppm), meaning that for every million molecules of air there are 400 molecules of carbon dioxide.

The finding is worrisome, as increased CO2 levels are linked to climate change.

This isn’t the first time a reading of 400 ppm has been recorded. In 2012, carbon dioxide levels also reached 400 ppm at NOAA’s Arctic stations. In 2013, the levels at the Mauna Loa station in Hawaii also recorded 400 ppm.

However, these new readings have been collected from 40 sites around the world and represent a global average, something that NOAA senior scientist Pieter Tans finds disturbing.

Though there is a natural contribution to carbon in the atmosphere, the level at which it’s been rising is what’s most alarming.

“You can see that CO2 went up and down by ice ages and warm interglacials,” Tans said. “CO2 when up and down by perhaps 80 parts per million…typically for CO2 to rise or fall that amount it takes at least 6,000 years, under natural conditions. So that translates to an annual rate of increase by natural processes of .01 to .02 parts per million per year.” 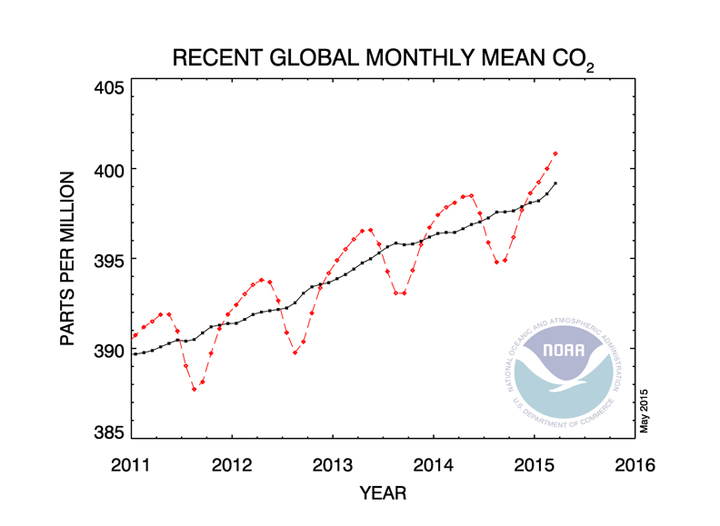 But the rise since the industrial age has been far more accelerated.

“Today, due to human activities, CO2 goes up 2 parts per million or more than, in one year. So what we see today is from a geologic perspective, an explosion, really.”

Tans said that it’s not that the 400 ppm number signifies any type of threshold.  It’s just a number. But, “we use 400 ppm to get this message out that we’re seeing something exceptional.”

While some may lay the blame on the oceans or volcanic activity for the sharp rise in carbon dioxide levels, Tans said that the research has taken those into consideration.

WATCH: A Year in the Life of Earth’s CO2
“We know for a fact that it is due, 100 per cent to human activities,” Tans said. “How? First of all… natural changes of CO2 went up at a rate of .01-.02 ppm per year [historically]. And now we have something that’s 100 to 200 times faster. So that is very exceptional. And it just happens to start in the 20th century.”
Story continues below advertisement

The second part is that they also measure its isotopic composition. Declining C14 ratios tells scientists that the source of the carbon is very old, such as fossil fuel or volcanic. However, declining C13 ratios indicates that the carbon belongs to a biological source, therefore it’s not volcanic. As well, CO2 in the ocean is increasing, which means that it’s not oceanic outgassing.

Another supporting bit of evidence is that most of the CO2 is found in the northern hemisphere, a highly industrialized region of the planet and one that burns most of the fossil fuels.

Tapio Schneider, a professor of geological and planetary science at the California Institute of Technology (CalTech) said that while the 400 ppm number doesn’t signal much in the way of recent change, it is important to take note.

“The number itself isn’t significant,” Schneider said. But, he added, “I remember when I first started in the field, the number was somewhere around 350 ppm. So since the ’90s, that’s been a big increase.”

Tans said that he’s worried about the consequences of continued rise in CO2 levels.

This “catastrophic change” would be evident in differing weather patterns, the possibility of the loss of arable land and higher sea levels.

Schneider agrees that the continued increase will result in visible climate change, something that we may not yet be seeing just yet.

As a scientist — and on a personal level — Tans finds the continued rise troubling.

“I’m worried,” he said. “We have to pay attention to this, for the sake of coming generations.”