Facelift for St. Louis Hotel while fate of Cecil still to be determined

A city committee will vote on Friday on changing the historic designation of the old St. Louis Hotel. The designation would be necessary for the East Village to continue its rebirth but will not affect the developers plans to save the landmark.

The fate of another one of Calgary’s old hotels, the Cecil, will be determined in the spring. The Cecil sits on prime real estate but was badly damaged in the flood of 2013. Cynthia Klaassen is President of the Calgary Heritage Initiative.

“I get that there are challenges with trying to save the Cecil which is why it would be great to see if something good can come of it it also talks about overcoming adversity.” 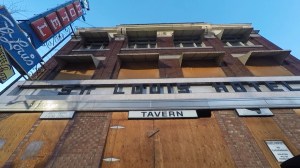 The St. Louis is expected to get a complete facelift including fine dining on the main floor, a tavern in the basement, and office space upstairs. Michael Brown is President & CEO of Calgary Municipal Land Corporation.

“Calgary has grown into a real centre for restaurants in Canada and this venue could be a very special place and could have a special restaurant offering.”

The St. Louis was a favourite spot for local politicians including then-mayor Ralph Klein who had his own chair in the basement.