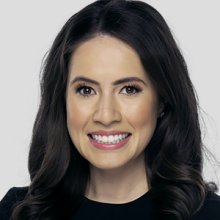 Meteorologist Yvonne Schalle brings you your weather forecasts weekends on Global News Hour at 6, Global News at 11, and BC1.

Born and raised in Burnaby, Yvonne is happy to be back home in B.C. Before joining the Global BC team, Yvonne spent more than five years working in both Toronto and Calgary. She has reported on weather all over the country, including in Toronto, at CityNews and The Weather Network.

With a strong background in hosting, producing, and reporting on shows ranging from entertainment news magazines to local newscasts, Yvonne realized that broadcasting was her passion while she studied communications at Simon Fraser University. Her energetic personality took her to Toronto shortly after graduation, where she took her first on-air position as an entertainment reporter and producer at Rogers TV Peel Region. Yvonne then moved to Calgary where she became a producer at a local production company, and later held host and producer roles for a local arts and entertainment show on Shaw TV Calgary where she also began weather forecasting for Alberta, Saskatchewan, and Manitoba.

Yvonne graduated as a meteorologist from Mississippi State University.

Birthday or Anniversary Announcements on Global News at Noon

To request a birthday or anniversary announcement on Global News at Noon, please call 604-420-2288. Please note: We limit our announcements to 100+ birthdays and 70+ anniversaries because we get so many requests. Thank you for your understanding. Also, we are not required to make these announcements, but we do our very best to accommodate everyone.

Please email your photos to weatherwindow@globaltv.com.