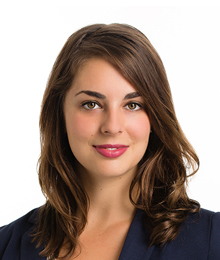 Talia Ricci was born and raised in Guelph, Ontario. She moved to Toronto in 2008 to attend Ryerson University to study journalism.

In her third year, Ricci received the Len Coates Memorial Award for being the most promising student in her class. She landed her first job in the broadcast industry, and quickly worked her way up to being a writer in Toronto.

In 2013, she relocated to London, Ontario, where she worked as a videographer. Shortly after, she joined the Global Winnipeg news team in 2014. Some of Ricci’s most memorable stories include covering the case of Tina Fontaine, being live at the winning candidates’ headquarters for the municipal election show, and a national story about a young Jets fan going through chemotherapy.

Ricci’s love for travel has taken her to Ghana, where she taught local kids about photojournalism, and to a small village in Ecuador, for a documentary photo project with Photographers Without Borders.

She is very enthusiastic about Winnipeg’s extensive music and art scene, and is excited to continue discovering Manitoba’s hidden gems.