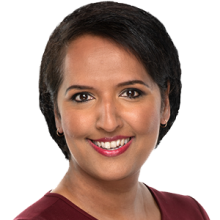 Simi Sara is the award-winning host of Mornings with Simi. She joined 980 CKNW in 2010 as host of The Simi Sara Show, a fast-paced breaking news program known for its expert commentary and opinion. In 2020 Simi took the reins of the morning show, where she can be heard introducing listeners to the top stories of the day over their morning coffee.

Simi grew up in Surrey, B.C. and has been in the media business for almost thirty years, with roles including newspaper reporter, producer and news anchor. Before making the move to radio Simi spent the early days of her career in television. Upon making the move to radio Simi also returned to education, graduating from Simon Fraser University with a Bachelor of Arts.

She is passionate about news, having won two national and three regional RTDNA awards for editorial and commentary, along with a Jack Webster award and BCABs.

Twists on classics are always a good thing, so this time we add some Moroccan spice and top it with crispy whole chickpeas, a crumble of feta, torn cilantro and pomegranate seeds. Continue reading →

Desiree Cluff, the owner and director of a sleep consultancy business, says parents need to keep practicing and not expect something to work right away. Continue reading →

This recipe is the classic elbow macaroni but with a cheesy twist. Continue reading →

October 4, 2017 5:20 pm
COMMENTARY: Why a university education can be so much more than a degree

Simi Sara opens up about why she went back to university, and how the most important lesson she learned wasn’t classroom material.  Continue reading →

This week’s Foodie Friday recipe is a northern-style grilled hen, brought to you by chef Angus An from Maenam restaurant. Continue reading →

This salad is typically served by vendors on the streets of Thailand. It’s very simple to make, but full of complex flavours. Continue reading →

This week is all about perfect peaches — both on the plate and in the glass. The perfect accompaniment to a summer evening with friends.  Continue reading →

This week we take a look at a traditional zabaglione, which uses only three simple ingredients, egg yolk, sugar, and Marsala wine. Continue reading →

This week we are looking at B.C. nugget potatoes. Continue reading →

This week's weather was perfect for night skiing. @TrishJewison captured these amazing shots of the North Shore mou… twitter.com/i/web/status/1…

RT @globalnews: The debate over whether Canada should have a national basic income has resurfaced in the wake of the COVID-19 pandemic. @m…

RT @globalnews: When a COVID-19 vaccine is approved for use in Canada, the rollout will involve layers of intricate logistics, government p…