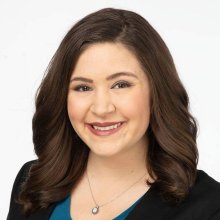 Sarah Komadina joined Global Edmonton in June of 2019 after working as the morning live reporter at Global Regina. Before that, she worked at Global Lethbridge.

Sarah was born and raised in Wainwright, Alta., and is proud to be reporting stories in her home province.

She began her career in northern B.C. as a video journalist after graduating from NAIT’s Radio and Television Arts program.

From there, she had the opportunity to work in Prince Albert, Sask., where she honed her skills covering wildfires burning thousands of hectares in northern Saskatchewan.

She also was in La Loche reporting on the aftermath of a school shooting that saw four people get killed and many others injured.

Sarah loves telling feature stories highlighting people who are doing amazing things. She’s especially proud of a story she did about a young man with Down syndrome looking for work. Weeks later he was offered two jobs.

One of her most memorable stories is a long feature on a woman coping with perinatal loss. To help other women and their families cope, a Regina woman started an initiative called Twinkle Star Baskets. The baskets were used to wrap babies in so parents could hold their child in something comforting before saying goodbye. The program started in Saskatchewan and has since expanded to other provinces.

When she is not reporting, you’ll find Sarah posting pictures of her photogenic and extremely adorable dog Koda to Instagram, hiking and attempting to bake something delicious.