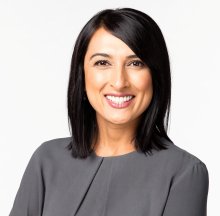 Since arriving at Vancouver’s national newsroom in December 2008, Gill has reported on some of the biggest news stories across Canada and around the world, including the high-profile inquiry into the death of Polish immigrant Robert Dziekanski at the Vancouver International Airport, the United Nations meeting in Geneva at which world leaders discussed how to handle former Libyan leader Moammar Gadhafi and the aftermath of the devastating earthquake and tsunami that struck Japan in March 2011.

In 2011, Gill found herself in the middle of chaos, reporting live from the Stanley Cup riots that erupted in downtown Vancouver. She was also on the anchor desk providing Canadians with up-to-the-minute coverage of the unprecedented attack on Parliament in Ottawa that left two dead, many in lockdown and heightened security across the country.

From February to March 2009, she travelled to India to produce a five-part special series on Canadians in the region.

Prior to Global National, Gill spent eight years reporting and anchoring at Global Toronto, covering some of the region’s biggest stories, including the Dalai Lama’s visit, the SARS outbreak and the Air France crash at Toronto’s Pearson International Airport. She also appeared on American television networks such as NBC and Fox, reporting live on those events.

Robin earned her degree from the University of British Columbia. She also has a diploma in broadcast journalism from BCIT.

While still in school, Gill began her career as a writer and researcher at BCTV (now Global BC). That led to a job as a reporter and anchor in a small town in Saskatchewan. From there, it was back to Vancouver for a reporting job at CBC. Gill later joined A-Channel Calgary (now Citytv) for the station’s launch in 1997, where she was a reporter and morning show co-host.

Why are they still sick? The search for answers inside Canada’s first post-COVID clinic

At St. Paul’s Hospital in Vancouver – Canada’s first post-COVID-19 clinic – they are trying to unravel the long-term effects of the coronavirus. Continue reading →

There are approximately 660,000 American citizens in Canada, and in the last U.S. election, about five per cent of them cast their ballots. Continue reading →

With first flight between Toronto and Abbotsford, Swoop hopes to fill a void for Canadian fliers

‘Devastating’: B.C. couples left in the lurch, out thousands after adoption agency closes

‘I would still love to adopt. But I don’t see how it’s possible in this scheme,’ said Kory Bell, adding the adoption process took a toll on her and husband. Continue reading →

West Vancouver councillor outs ‘shocking’ racism in B.C. real estate — but it’s not the only example

Vancouver’s British Properties isn’t the only Canadian neighbourhood that has a history of real estate rules that promote racial segregation. Continue reading →

The Vancouver Police Department says there’s been a 600 per cent increase in reports of hate crimes targeting the Asian community since the coronavirus crisis began. Continue reading →

This B.C. film director can tell you how to get to ‘Sesame Street’

One-on-one with Michael Moore: Trudeau, Trump and what the U.S. could learn from Canada

Robin Gill sat down with the documentary filmmaker in Vancouver to talk politics and the filmmaker’s election predictions on both sides of the border. Continue reading →

The BC Funeral Association issued a memo to members suggesting staff arm themselves with naloxone kits. Continue reading →

In 1966, just five months after they tied the knot, the Kelowna couple went back to their hometown of Edberg, Alta. Willard was asked to referee a football game at the high school where the couple first met. Continue reading →

Does there need to be a potency limit for legal pot?

Doctors at Washington’s Providence St. Peter Hospital are dealing with patients showing up with panic attacks and psychotic episodes because they’re smoking stronger pot than they’re used to. Continue reading →

Legalized marijuana: Capitalizing on cannabis or profiting from potheads?

The green rush happening in Washington state is proving to a boon for both business owners and the state. Continue reading →

A Hong Kong court agreed this week to release the group, which includes three former legislators, but prosecutors a… twitter.com/i/web/status/1…

"Bitter cold didn't affect our movement, and neither will deathly heat," said one protesting farmer. trib.al/QWSyJyg

"We will need to put some things in writing today," one individual told the Privy Council Office. trib.al/cUiVlfW