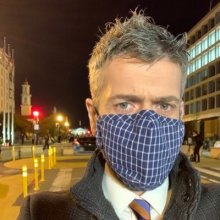 Reggie Cecchini is an experienced journalist with a history in both radio and television newsrooms.

He joined the Global News Washington Bureau in February 2015 as a producer and editor before becoming a correspondent in 2017 for Global News and Global National.

Since moving to D.C., Reggie has covered everything from natural disasters to national protests, along with two presidential elections, several state primaries, and the fast-paced changes that occurred throughout the four years of the Trump Administration.

His radio roots shine through as he regularly appears as a guest on Global News Radio stations across the country, discussing the latest news from the U.S.

Prior to arriving in Washington, Reggie spent almost eight years with Global News Radio 640 Toronto, as a reporter and news anchor, with prior stops at radio stations in Toronto, Hamilton, St. Catharines and Niagara Falls – where he landed his first radio gig while still in high school.

Originally from the Thorold, Ontario, Reggie holds a broadcasting diploma from Humber College, and is in a constant battle to determine whether he enjoys travel, cooking or craft beer most.