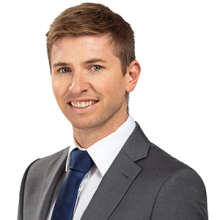 Paul Brothers career path in broadcasting began in Grade 9, when he started his own radio station at his junior high school.

Since then, he’s held a number of positions in radio and television, and is now co-hosting the Morning News on Global Halifax.

From his early years until now, Brothers has had an interesting journey. For nearly three years, he was the Halifax host of Going Coastal on MuchMusic, interviewing hundreds of bands from all genres.

From there, he went to Toronto to fulfill his dream of being a sportscaster on theScore. In the three years he worked there, he interviewed sports legends Steve Yzerman, Jerry Rice, and Roberto Alomar, and got to cover his favourite teams, the Miami Dolphins and the Toronto Maple Leafs.

Brothers has a passion for the East Coast, and its people, and he’s excited to be telling their stories, and sharing what they need to know to kick start the day.

Depending on the season, he can be found mountain biking, or watching his wife Jill, curl at the local rink.

The Stanfields release new live album “Welcome to the Ball”

Caleigh Alleyne is an editor with Air Canada’s enRoute Magazine and recently compiled a list of seven virtual trips as a travel-inspired remedy to combat COVID-19 boredom for kids. Continue reading →

Come and he Will Sing You: Alan Doyle launches Facebook Live series for Kids Help Phone

Doyle is hosting a Facebook Live series of tunes that raises donations for Kids Help Phone through his A Dollar A Day platform. Continue reading →

De Jonge, like most Canadian athletes this week, is disappointed but not surprised by the decision to postpone the 2020 Olympic Games in Tokyo. Continue reading →

Twenty-five years is a long time between visits, but Canadian rock icons Rush more than made up for it with a blistering three-plus hour set in front of a packed house at the Halifax Metro Centre Friday night. Continue reading →

Monday on the Morning News: Moose sex, cyber safety and ‘Visit with a Vet’

Join Crystal Garrett, Paul Brothers and Jill Chappell for your Morning News headlines, traffic and weather beginning at 6 a.m. Tune into Monday’s show for an update on “The Moose Sex Project,” our “Visit with a Vet” and find out why Garrison Brewing Co. is reaching out to home brewers. Continue reading →

Saint Mary’s University in Halifax released a statement that a positive COVID-19 case was detected in a community m… twitter.com/i/web/status/1…