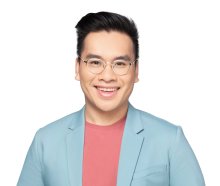 Liem Vu is a journalist with over 10 years of multi-platform experience. He can be seen weekdays on Global News Morning as a co-host and weather specialist.

Born and raised in Toronto, Liem is the youngest of a family who fled a war-torn Vietnam in search of a new life in Canada. After spending his childhood in Scarborough, Liem graduated with distinction from the University of Toronto and went on to earn his Master of Journalism degree at Ryerson University.

His sense of curiosity and passion for storytelling have brought him to the front lines of breaking news. Liem has written for both local and national publications including The Toronto Star, The Globe and Mail, and The National Post. On TV, he has created and fronted national content on MTV News, 16×9, The Morning Show, Global News @ 5:30, Global National, ET Canada, and The New Reality.

In his role on Global News Morning, Liem is a co-host & weather specialist, offering his own take on the trending news of the day and interviewing guests. Throughout his decade-long career in morning television, he has shown his versatility by covering broad topics, local stories and also interviewing big celebrities like Hugh Jackman, Will Smith, Jake Gyllenhaal, Margot Robbie, and Ryan Reynolds.

He is active behind the camera, producing and editing many of his own stories for the show and working regularly with sales clients. In 2020, he created “Fresh Off The Plate,” a series profiling the diverse food scene in Canada with a focus on elevating BIPOC businesses.

Liem is an avid music fan, insatiable foodie, and all-around nerd. He is also a cat dad of two Russian Blue cats named Harpo and Henry. Prior to his career as a journalist, he moonlighted as the lead singer of a barbershop quartet called ‘The TemptAsians’ and has seen every episode of Buffy: The Vampire Slayer at least twice.