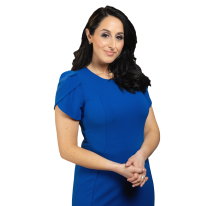 She graduated from Concordia University with a Bachelor of Arts in Journalism.

Laura began her broadcasting career in 2007 as a freelance reporter and overnight newscaster on CJAD.

She was also a producer for the Tommy Schnurmacher Show.

In 2011, she began working as the station’s morning news reporter, while at the same time freelancing for CTV Montreal.

Some of the big stories Laura has covered in the past decade include the 2012 Quebec student protests over tuition fee increases, floods in Saint-Jean-sur-Richelieu and the papal conclave in Rome, Italy.

Prior to becoming part of the Global News family, Laura worked at BT Montreal as a co-host and anchor.

When not at the news desk on Global News Morning, Laura is an active member of her community and a doting mother to Ella and Gia.