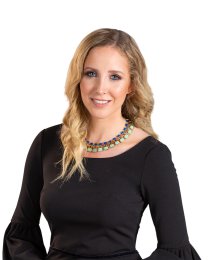 Growing up in North Battleford, Sask., Gabrielle considers herself a prairie girl through and through. She ditched the coveralls after high school and ended up working at an international school in Brazil, where she had a conversation with a female journalist and decided on a whim it was the career path for her.

That pursuit took her to Lethbridge College followed by an internship with Global Toronto and the National’s Ottawa bureau, right before landing her first reporting job at Global Saskatoon.

The next pit stop was Victoria to complete a university degree, after which she got her first shot at anchoring for Thunder Bay Television. Two years by the lake led to a career opportunity in Winnipeg, and she’s been here ever since!

Gabby considers Winnipeg her forever home, even abandoning the Roughriders to repeatedly root for the Blue Bombers on the morning show.

When she’s not getting up at 3 am for work, she can usually be found drinking too much coffee, eating nachos and looking at dog pictures on the internet.

Her passions in life are family, puppies and bourbon.