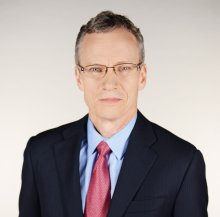 Eric Sorensen became Global National’s Senior National Affairs Correspondent in early 2014. Eric spent eight years as Global National’s Washington Bureau Chief covering the most significant stories in the U.S. and around the world, including the funeral of Nelson Mandela from South Africa, the election of U.S. President Barack Obama, and the Winter and Summer Olympics in Vancouver, London and Sochi, Russia.

Before joining Global, Sorensen spent 18 years with CBC covering breaking news: from the death of Princess Diana in Paris to the Swissair crash off Nova Scotia. As a parliamentary reporter, Eric was aboard several national election campaigns, covered international summits – G-8, NATO, APEC — and travelled across five continents with three prime ministers. He was also a CBC National reporter based in Yellowknife and Saskatoon.

Eric launched his broadcasting career at CHOW Radio in Welland, Ont. He worked in Wingham and Peterborough, was news director at ATV Moncton, anchored the news at CFPL TV in London, Ont., and reported for CTV (CFTO TV) Toronto.

Eric earned his Bachelor’s Degree from Toronto Metropolitan University in 1976, and the same year was named MVP of the varsity basketball team. Eric was the first Canadian to receive the Benton Fellowship in Broadcast Journalism from the University of Chicago in 1984.