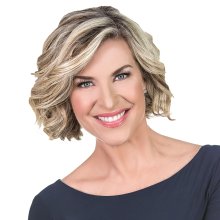 Carolyn MacKenzie is an award-winning journalist who has spent more than 15 years covering the biggest stories in the GTA and across Canada. She brings her extensive experience to her role as anchor of The Morning Show.

MacKenzie began her journalism career hosting Toronto Living on Rogers Television. Wanting to move into the world of news, Carolyn moved to Eastern Canada to work as a videographer for ATV/CTV News in Cape Breton Island. She later moved to Barrie, Ontario where she was a reporter and anchor at the New VR for several years.

In 2005, MacKenzie returned home to Toronto and joined the Global News Team. In 2006, she won the RTNDA Edward R. Murrow Award for Best Investigative Journalist for her series on transit inaccessibility. She also won Best Spot News Story from York Regional Police for her coverage of a home invasion in Vaughan.

MacKenzie anchored the newscast G20 Riots which later won an RTDNA for Best Breaking Newscast in 2010. Other career highlights include covering the Air France crash and the Queen’s Jubilee.

She works closely with a number of charities including, Juvenile Diabetes, Microskills, March of Dimes and Childrens’ Wish.

She earned an Honours Degree in journalism from Carleton University and lives in Toronto with her husband, a Toronto firefighter and their two children.

06:20
The Morning Show
Alanis Morissette on motherhood, postpartum depression and her new album

With the recent Yorkdale shooting many could not help but wonder whether this was a going to be a repeat of last summer’s gunfire that broke out in the Toronto Eaton Centre’s food court. Carolyn Mackenzie reports. Continue reading →

RT @cmcdonaldglobal: #Breaking Subway pusher John Reszetnik has been sentenced to life in prison with no chance of parole for 14 years. In…