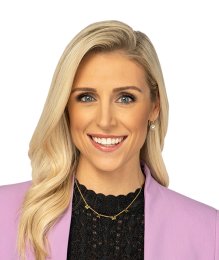 Carole Anne Devaney is co-anchor of the #1 rated Global News Hour at 6 on Global Edmonton.

She is a proud French-Canadian, who was born and raised in Canada’s Capital. Carole Anne landed her first on-air gig as a student reporter with CTV Ottawa. Her experience then took her to Parliament Hill, where she reported for a French political TV show, on CPAC.

In 2008, she drove 39 hours across the country to Edmonton, after accepting a reporting position with CBC. In February 2011, Carole Anne joined the Global News team, and was quickly promoted to primetime news anchor, with veteran co-anchor Gord Steinke.

Carole Anne is dedicated to “Our City” through her extensive work in the community. She gets behind several causes, including the Global News Give Me Shelter Campaign, Read in Week, and the Edmonton Burn Treatment Society. She also helped initiate the annual Global News Wardrobe Sale that benefits local charities including the Terra Centre for Teen Parents.

The highlight of her career is introducing talk-show star Oprah Winfrey, during her visit in 2013, in front of a sold-out crowd at Rexall Place. Carole Anne’s proudest accomplishment, however, is leading Global Edmonton’s Bust-a-Move team, in raising more than $100,000 for breast cancer research in Alberta.

Carole Anne has been married to her best friend, Edmonton firefighter Connor Devaney, since July 2012. They are the proud parents of daughters Emmanuelle and Amélie, and son Sidney.

In her spare time, Carole Anne loves to muse about the good, the bad and the ugly of motherhood. She often makes light of the realities of parenting in her popular blog “Business on Top, Party on the Bottom.”

Carole Anne holds a diploma from the Carleton University School of Journalism, and is the recipient of an RTDNA Award for producing an undercover investigative series on out-of-town vehicle inspections.

WATCH: Carole Anne answers a few questions for Global Edmonton viewers, including: what are you most passionate about, what is one thing you would need on a deserted island and the best part about living in Edmonton?