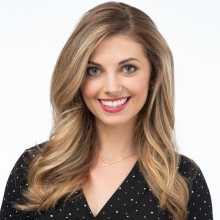 Growing up in BC’s Creston Valley, Cami Kepke was introduced to the world of broadcasting as a teenage play-by-play announcer for the local junior ‘B’ hockey team.

She graduated with honours from the Broadcast News Program at the Southern Alberta Institute of Technology in 2015.

Kepke’s career began in Northern BC as a radio reporter and team host for the Prince George Cougars, before crossing the country to join CTV Atlantic. With a passion for telling unique news and sports stories, she won an RTDNA for Sports Feature Reporting in 2017.

She joined the Global Regina team as a Digital Broadcast Journalist/Anchor in the spring of 2018.

Kepke has appeared on hockey broadcasts in more than 10 different leagues, and worked with several of Canada’s National Teams. She’s happiest when she’s climbing a mountain, nailing a takeout in curling, or covering rock classics on bass.