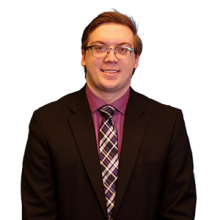 Growing up in Edmonton, Adam graduated from NAIT’s Radio and Television Arts program and quickly moved to CTV Edmonton as an intern in the sports department.

Adam got his first job in the industry at Saskatoon Media Group where he spent the next four years as a news reporter and anchor at CJWW. During his time at Saskatchewan’s most listened to radio station, he covered everything from city council and provincial politics to agricultural news and court cases.

He returned home to 630 CHED and Global News Radio 880 Edmonton in December 2017 and spent a year and a half delivering the news as an anchor for the two radio stations.

Adam has now returned to Saskatoon to join the Global Morning News team as the show’s producer.

When he’s not on the air, Adam enjoys cheering on the Saskatchewan Rush and talking a walk down Saskatoon’s river valley.

Despite the closure of Rainbow Cinemas Saskatoon in May, the Roxy Theatre continues to compete with major national cinemas to attract moviegoers. Continue reading →

From council and committee meetings to attending city events and addressing citizen concerns, Saskatoon councillors deal with a lot — even though the position is part-time. Continue reading →

Advice for runners as Edmonton Marathon inches closer: ‘Everyone’s capable of completing it’

This year’s marathon will take place August 18, with events including five- and 10-kilometre races and half and full marathons. Continue reading →

“Would you be prepared to leave your home for up to a week within the next half hour, and to make sure you take all the things with you that are essential?” Continue reading →

A Red Deer racer’s goal to compete in one of the world’s biggest open wheel series will continue on, for now. Continue reading →

Sixty-four teams from across the province — and as far away as Australia — will be taking part in this year’s Alberta Pond Hockey Championship. Continue reading →

Stefan Rzadzinski is one of 12 drivers in the inaugural season of the Jaguar I-Pace eTrophy, the first ever international race series for a production battery-electric vehicle. Continue reading →

An Alberta psychiatrist says the mental health supports brought in after the Fort McMurray wildfires of May 2016 haven’t done enough to help students. Continue reading →

New impaired driving laws, which are part of Bill C-46, give police across Canada the authority to demand breathalyzer tests from any driver they pull over. Continue reading →

However, in Alberta and Atlantic Canada, more than 60 per cent of survey respondents would support an increase in oil tanker traffic around B.C.’s South Coast. Continue reading →

Officers responded to a call at 1:40 a.m. Sunday to the Alibi Ultra Lounge at the corner of Jasper Avenue and 100 Street. Continue reading →

With temperatures below zero Sunday morning, it felt a bit more like Christmas as motorcyclists gathered for the 630 CHED Santas Anonymous Edmonton Toy Run. Continue reading →

Health
September 23, 2018 12:30 pm
Exercise, not rest, may be best for coping with chemo: University of Alberta study

Dr. Kerry Courneya at the University of Alberta’s Faculty of Kinesiology says exercise, not rest, may be the best option to cope with cancer treatments. Continue reading →

One Canadian’s courageous run in the face of adversity continues to inspire people across the country nearly four decades later. Continue reading →

RT @GlobalNational: The B.C. government has implemented some limited exceptions to a blanket ban on in-person worship imposed in November i…

A recent poll found that 64 per cent of Canadians said they aren’t going to be comfortable travelling abroad until… twitter.com/i/web/status/1…