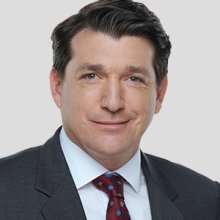 From an early age, Aaron knew he wanted to work at Global News (then called BCTV). Growing up in Fernie, B.C., the television in the McArthur household was always on and tuned to Global News morning, noon and night. But Aaron still managed to find time to spend the summers on golf courses and the winter on the ski hills.

Aaron graduated from the University of Victoria with a major in political science and a minor in history. He then enrolled in BCIT’s broadcast journalism program. Aaron started his journalism career at a local television station, then known as UTV, before moving to Global Saskatoon as the weekend anchor and reporter. He then moved on to Global Regina as the late night anchor before returning to the Lower Mainland, joining Global BC in 2001 as a reporter. You will also find him filling in on the anchor desk.

In his off hours, you and find Aaron spinning his wheels on the bike or traveling around the world. Some of his favourite destinations include Hong Kong, Italy and Antarctica. But mostly, he loves spending time with his two children.