University costs have tripled over past 20 years, study suggests

TORONTO – Canadian students hoping for some financial relief on the cost of their post-secondary education are in for a disappointment over the next few years, a prominent think tank suggests.

A report from the left-leaning Canadian Centre for Policy Alternatives forecasts the inflation-adjusted cost of an undergraduate university degree is expected to climb an average of 8.6 per cent over the next four years, extending a trend that has seen the price tag triple over the past two decades.

The inflation-adjusted cost of tuition and other compulsory fees averaged $2,243 across the country in 1990, the report showed. That figure had climbed to $6,254 for the 2012-13 academic year and is projected to keep rising, the centre said, adding the study focused solely on mandatory costs and did not factor in other financial demands such as books, food and accommodation.

The basic cost of an undergraduate degree in 2016-17 is projected to average $6,842, or slightly more than three times 1990 levels, the report said.

Take a look at the average costs across the country here: 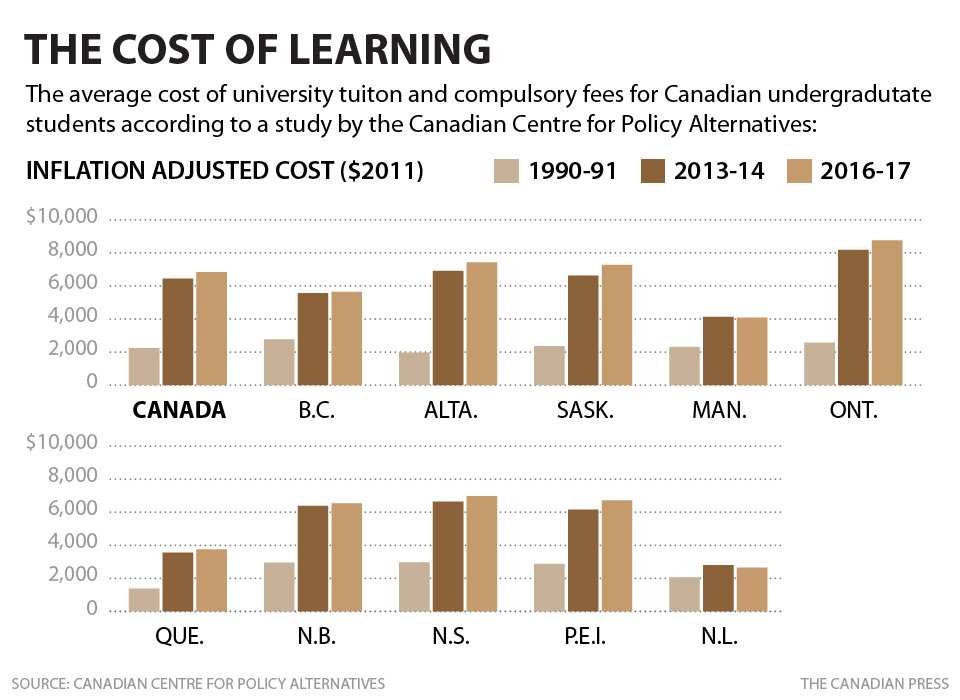 Reductions in public funding signal a fundamental change in the way Canadians view higher education, she said, adding post-secondary schooling is increasingly viewed as a privilege that should be funded by those who want it.

“There’s been a shift in how we think about tuition fees and how we think about post-secondary education, moving away from the sense that this is a public good and something that we benefit collectively from very substantially because social and economic returns on education are very high,” Shaker said in a telephone interview.

This approach, she said, risks short-changing Canada down the road by placing an entire generation at an economic disadvantage.

Students saddled with crippling debt loads will be less likely to own homes or accumulate wealth, she said, adding they also face long odds of relieving their fiscal stress.

The unemployment rate for young people is nearly double the national average, and new graduates are more likely to find themselves working temporary or contract positions with dubious long-term prospects.

Student debt can also make itself felt by concerned parents who pitch in to try and help their offspring, she said, adding high tuition fees can result in postponed retirements and depleted savings.

But the provinces have drastically cut back on the amount of money leaving public coffers over the past 20 years. Government funding covered 71 per cent of tuition fees in 1990 compared to 55 per cent in 2009, the study found.

Shaker said the public assistance that is available is not always easy to find, placing the onus on students to hunt down and apply for relevant funding programs.

Shaker said Canada would do well to emulate countries such as Germany and Finland, which remain economically prosperous while offering almost fully-funded public university education and in some cases even cost of living subsidies.

Antoine Genest Gregoir, president of the Quebec Federation of Students, said it was precisely this message students hoped to communicate last year during months of province-wide protests.

Students boycotted classes and took to the streets in droves to show their displeasure with a plan to raise tuition rates by 77 per cent over five years. The then Liberal government passed an anti-protest bill to force the protesters back to school and ultimately saw their plan shelved when the new Parti Quebecois government implemented much smaller hikes.

Genest Gregoir said tuition hike proponents who wanted to see Quebec’s comparatively low fees brought in line with the national average were not accounting for the benefits of affordable education.

He said low university fees level the playing field for rural or low-income students who may otherwise be left on the margins.

“These are clear signs for us that such hikes in the rest of the country are not something we should be looking into,” he said.

The Centre’s study found Quebec boasts one of the lowest tuition rates in the country, trailing only Newfoundland and Labrador in 2012-13. Inflation-adjusted tuition in that province averaged $2,825, compared to Ontario’s nationwide high tuition of $7,943.

View this document on Scribd
© 2013 The Canadian Press