By Michelle McQuigge The Canadian Press

A Calgary coffee lover has started a conversation brewing about one of the country’s most popular java chains, and it seems the public doesn’t want to put a lid on it anytime soon.

A jocular letter of complaint addressed to the head office of Tim Hortons has found a broad, receptive audience that seems to agree with Bryan Hansen’s main beef – that the lids the coffee giant places on its cardboard coffee cups are far from tops.

Hansen said his years as a Tim’s regular left him with his fair share of depleted drinks and scorched skin as coffee oozed out from under ill-fitting lids.

The final straw, however, came on Wednesday when a newly purchased coffee spilled in spectacular fashion all over his freshly reconditioned truck console.

“After having the vehicle detailed, I was like, ‘enough is enough,”‘ the 28-year-old environmental consultant said in a telephone interview from Calgary. “I kind of had a flashback to every time that it’s ever happened to me and I was like, ‘you know what? I’ve got a little bit of free time this morning, I’m going to write them a letter about it.”

The result shows no sign of the frustration he felt while sitting in his coffee-stained truck.

Hansen’s missive strikes a tone of levity from the address line where he debates whether to direct it to the attention of the company’s “Lid Manager,” “Product Containment Engineer” or “Liquid Suppression Expert.”

The letter continues in the same vein, with Hansen mixing light-hearted pop culture references with genuine complaints about the quality of the company’s lids.

He describes them as “the worst thing to happen to Canadian popular culture . . . since Avril Lavigne married Chad Kroeger” in one sentence, then immediately shifts to gentle criticism of a design that exposes people to major messes and minor burns.

“I’m not calling it BP Oil Spill Bad…but I’m also not saying it isn’t,” Hansen quips before adding a self-deprecatory remark about his first-world, upper-middle-class problems.

Hansen’s letter is sprinkled with his trademark irreverence as he illustrates the perils of lids whose sealing mechanism has the potential to inflict pain.

“I end up with scalding hot coffee on my face and on my shirt because your lids do not open in a consistent manner which thereby makes it impossible for one’s lips to create an adequate seal around the edge of the coffee cup,” he writes. “This results in hot leakage. Very Hot Leakage (*rights reserved for a future Adult Film title.) So there I am in pain; shaking, burnt and bleeding. It’s at this time I ask myself “is this coffee, or is this Fight Club?”

Hansen calls on the company to redesign the troublesome tops and concludes by sharing the results of a tongue-in-cheek facebook poll he conducted, adding at least seven per cent of his friends share his views. 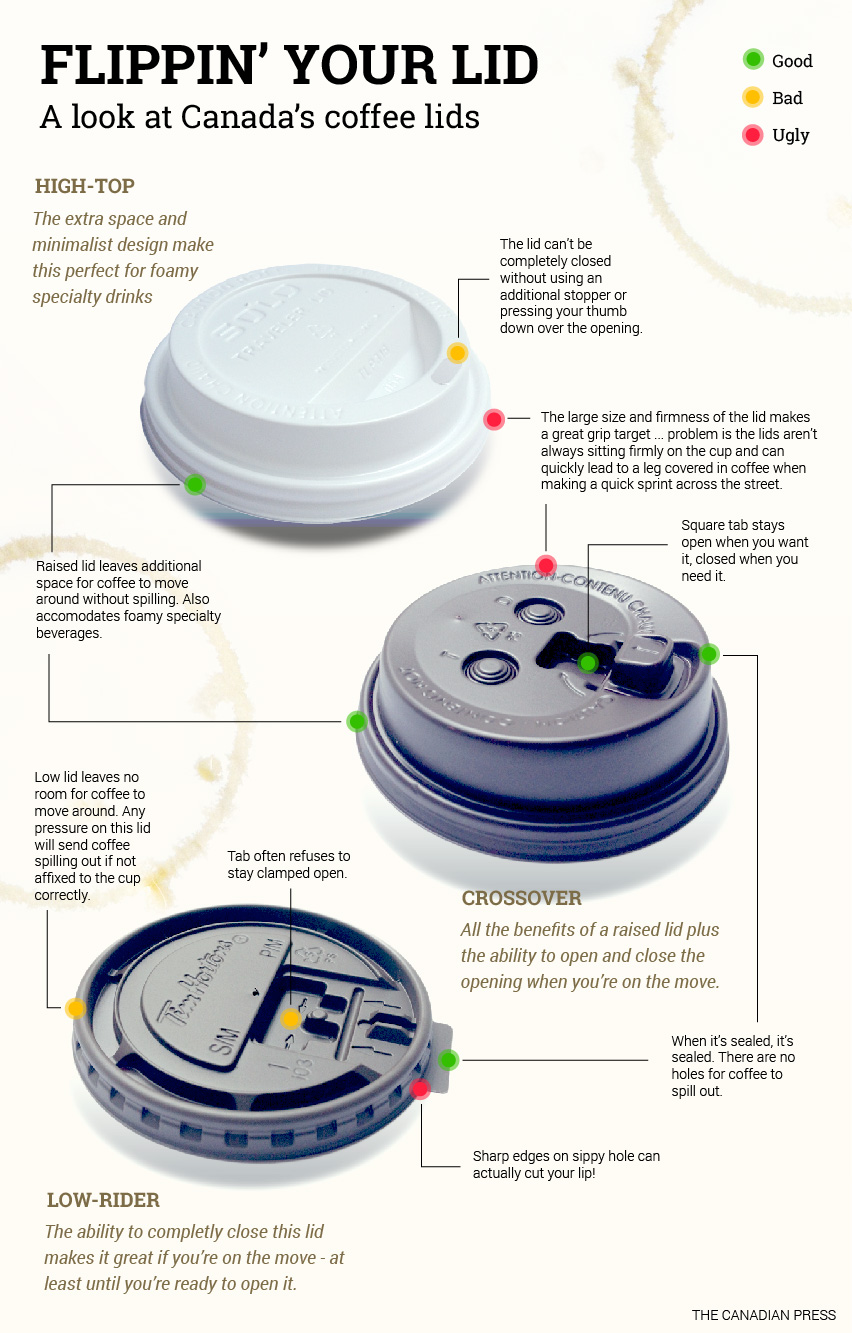 Judging by the reaction Hansen’s letter garnered once exposed to a wider audience, the number may well be higher.

Dozens of people on social media site Reddit were quick to agree with Hansen’s claims and tout the virtues of rival lids.

“McDonald’s lids are awesome. Drinking their coffee is like making out with a supermodel,” wrote one Reddit user.

Even those who had not read Hansen’s letter agreed, adding the leaky lids have been enough to cost the company some business.

“I’ve just resorted to not drinking Tim Horton’s coffee any more,” said Vanessa Zeppieri of Toronto. “. . . All of their lids are like that. Even their “ice cap” lids have started to leak, and as a consumer I don’t feel I should have dripping coffee and “ice cap” all over my hands.”

Just as strongly as this guest feels about his perspective on our lids, there are many others who have a different opinion,” she said in an email statement. “We value all views and will take his feedback into consideration.”

Hansen said he has heard directly from a corporate spokesman who indicated the company is willing to take the complaint seriously.

He also said the exposure his letter has received has led to some tips that offer at least a band-aid solution for weary double-double lovers.

“I ordered one with a latte lid this morning and it almost solved the problem for me,” Hansen said. “I was really impressed.”