Ontario government tables $187B budget in response to coronavirus pandemic

By Shawn Jeffords and Paola Loriggio The Canadian Press

TORONTO — Ontario will spend a record $187 billion this year as it lays out a plan to recover from the COVID-19 pandemic, with money earmarked for the health-care sector, to support for seniors living at home and to subsidize electricity rates for businesses.

The province’s first budget since the start of the global health crisis shows it will spend $45 billion over the next three years to respond to the pandemic — $30 billion was previously announced this year, and $15 billion in new funding will be spent over the next two years.

The fiscal plan presented Thursday also shows a record deficit of $38.5 billion for this year, consistent with the government’s summer projections. A path to balance is expected in next year’s budget.

In tabling the spending plan in the legislature, Finance Minister Rod Phillips said the budget aims to “provide as much certainty as possible in an uncertain time.”

“There is still great uncertainty in the global economy, and this means the same thing for the Ontario budget as it does for the family and business budgets,” Phillips said.

“This means there is a greater degree of risk underlying our projections than normal.”

0:51 Ontario projects record deficit of $38.5B in line with summer projections

The budget also includes a tax credit meant to help seniors stay at home longer, which will reimburse them for 25 per cent on eligible renovations of up to $10,000, regardless of their income and whether they owe taxes for 2021.

It also renews funding to help parents with the added costs of at-home education, which consists of $200 per child under 12 and $250 per child or youth with special needs. That program will cost the province $380 million, on top of the $378 million spent earlier this year.

The document does not, however, provide costing for the new standard for long-term care announced earlier this week, which would see nursing home residents receive an average of four hours of direct care every day.

Asked about the omission, Premier Doug Ford insisted the province is “totally committed” to the new standard but said it needs to consult with stakeholders before providing more details.

Phillips said the government needs more time because it only received interim recommendations from its commission on long-term care two weeks ago.

Education spending is expected to stay largely the same over the next three years, with $31 billion allocated this fiscal year, $31.1 billion next year and $31.3 billion in 2022-2023.

The government is also taking on a long-term expense in this budget by announcing it will subsidize a portion of hydro rates for medium and large commercial and industrial businesses, a move it said will help make the province more competitive. 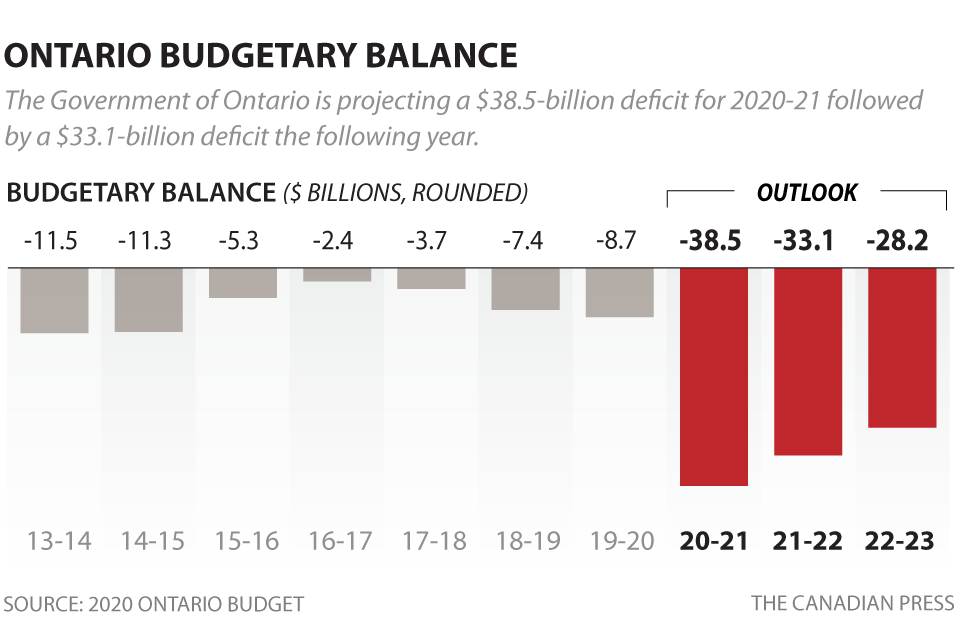 Opposition legislators decried what it called a lack of long-term support for hospitals, long-term care and businesses struggling to weather the pandemic, saying the fiscal plan contains only minor, one-off relief.

Phillips acknowledged in the legislature that some may question the government’s pandemic response.

“We respect those who, from outside of the government, in good faith, call for different decisions and different approaches,” he said.

“But please understand the difference. When critics get it wrong, the consequences are minor. When the government gets it wrong, people’s lives are at stake. And every decision we make is made with the heavy knowledge that lives are on the line.”

The budget includes three possible scenarios for the province’s economic recovery over the next two years – an official projection based on medium growth and two alternatives, one based on a slower growth outlook and another with more rapid growth.

The government predicts the deficit will go down to $33.1 billion in 2021-2022, then to $28.2 billion the following year under the medium growth scenario.

The government put off delivering a full fiscal plan earlier this year, citing the economic uncertainty caused by the global health crisis.

The fiscal update it gave in March instead initially included $17 billion in COVID-19 relief, though that projection was updated to $30 billion by the end of 2020-21.

The province also originally predicted a deficit of $20.5 billion, which was later raised because of the added spending.