Premier Doug Ford is suggesting “a couple of bad apples” are causing the problems in an ongoing Indigenous land dispute in Southern Ontario.

During his COVID-19 address on Friday, the premier said violence would not be tolerated and that the occupiers of the McKenzie Meadows housing development should “sit around the table” to talk about “solutions” instead of attacking police.

“It just frustrates me. There’s no one, no government that I can remember that has supported the First Nations community more than our government,” Ford said.

Tensions escalated between police and a group from Six Nations of the Grand River that identifies itself as “land defenders” following a court decision that ordered demonstrators to permanently leave the construction site.

Ontario Provincial Police (OPP) allege fires were lit around the site, a school bus was overturned, and that police cruisers were “heavily damaged” by the protesters.

Demonstrators said on Twitter that police fired rubber bullets at them.

OPP fired rubber bullets and aimed at Haudenosaunee women. This is how land claims are settled in Canada

OPP say Highway 6 between Fourth Line and Greens Road is closed for the time being.

Demonstrators told Global News that they’ve been offered a meeting with the federal government but say no decision has been made on where and when that might take place.

Haldimand County Mayor Ken Hewitt, who characterizes the protest as “not peaceful,” says the federal government definitely needs “to take a much more active role” in dealing with the claim that’s been an issue for several years.

“There’s also a governance issue that exists on Six Nations,” Hewitt said in a media scrum on Friday.

“And so who do you speak to? Who do you negotiate with? Setting a table and not knowing who’s going to be sitting at that table is a challenge.”

Protestors have dubbed the site “1492 Land Back Lane” saying it’s on unceded Haudenosaunee territory and that the tract of land was promised to Six Nations in 1784 but unlawfully sold to a developer by the Canadian government in 1853. 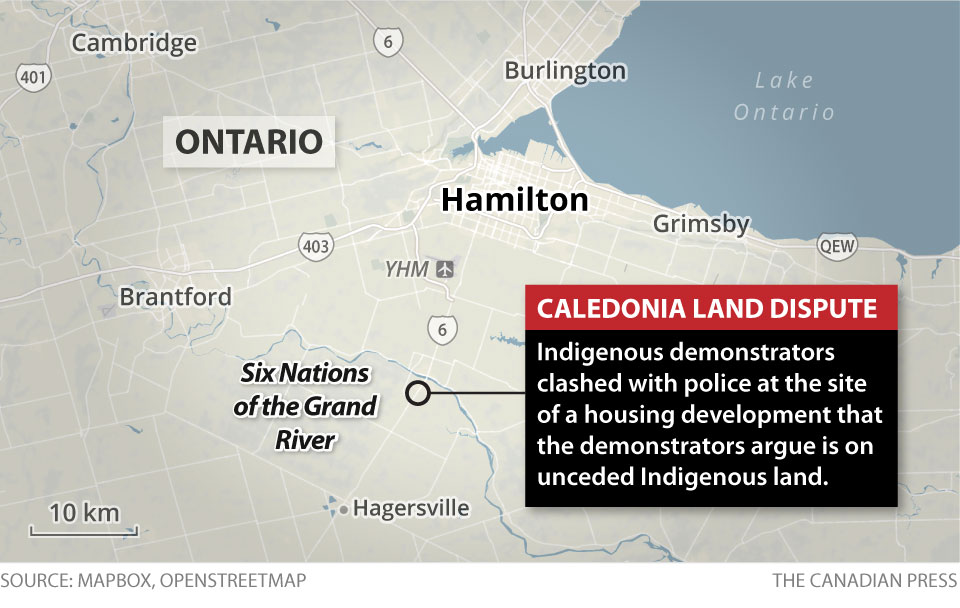 Developer Foxgate plans to sell close to 200 homes on the stretch of land at Mackenzie Meadows near the Six Nations reservation.

Ontario Provincial Police (OPP) say two court injunctions are currently in effect and prohibit anyone from being on the property. Police say 33 people have been arrested in enforcement of the court order.

Demonstrators have declined an interview request from Global News since the decision on Thursday.

In a statement, the Six Nations Elected Council are calling for “calm, peaceful, and respectful relations on all sides” and say they do not condone the violence.

The council says they believe the deal they signed with the developer was a “benefit” to their community and are bound by the agreement.

They also admitted they were “disturbed” by the decision made by Justice John Harper issuing the permanent injunction characterizing it as “systemic racism.”

The premier says he feels for a forgotten group in the dispute — people who purchased properties from the developer.

“These people have saved everything they’ve had. They go into a community. They buy a home like all of us. Our goal is to buy a home. And all of a sudden someone comes in and says, no, not yours anymore. It’s ours. It’s unacceptable.”