A new survey suggests that while Canadians are divided over removing monuments to politicians who harboured racist views or pushed racist policies, many oppose the “spontaneous” toppling of statues of Canada’s first prime minister, John A. Macdonald.

The online poll by Leger and the Association for Canadian Studies follows the controversial tearing down and vandalism of a Macdonald statue in Montreal last month by activists angry over his anti-Indigenous views and policies.

The incident, which was condemned by political leaders of various stripes, occurred during an anti-racism protest Aug. 30. Video showed a group of activists chanting and cheering as the statue was pulled to the ground before its head snapped off. 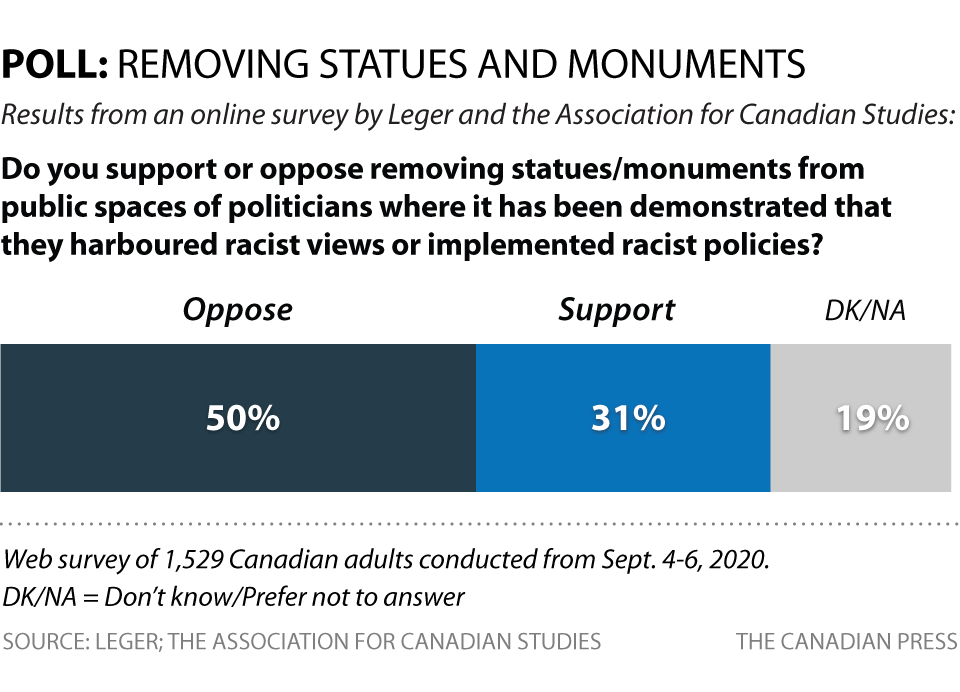 The episode represented the latest chapter in a growing debate about what to do with such statues, given Macdonald’s legacy as an architect of both Canada and the country’s residential school system, where thousands of children suffered abuse, or even death, during efforts to stamp out Indigenous culture.

Half of the respondents to the survey said they oppose the idea of removing statues or monuments to politicians who espoused racist views or implemented racist policies, while 31 per cent said they support such moves and 19 per cent did not know.

The divide was smaller when it came to streets, schools and other public institutions bearing the names of historic figures shown to have been racist, with 47 per cent against renaming them and 34 per cent in favour.

Yet 75 per cent of respondents to the poll were against the Montreal-style “spontaneous” tearing down of Macdonald statues by activists while only 11 per cent said they were in favour.

The numbers suggest Canadians are more supportive of a deliberate process of dealing with such statues _ but take a critical view of activists taking matters into their own hands, said Leger executive vice-president Christian Bourque.

“If it was not through vandalism, would that number be different? Most likely. Because fully a third of Canadians say they would support removing a monument or statue if it were for the reasons described there,” Bourque said.

“But support for doing so through vandalism or some form of illegal action is not supported. In the context that it was done in Montreal, it doesn’t get support from anybody.”

The results show respondents are also divided over how they see Macdonald.

Forty-four per cent said they considered him first and foremost as the architect of Canadian confederation while 15 per cent viewed him as having set in motion policies that attacked the rights of Indigenous Peoples and sought to assimilate them.

The online survey of 1,529 Canadians took place Sept. 4-6. An internet poll cannot be given a margin of error because it is not a random sample.