A Calgary mother is warning others after her identity was used to apply for CERB benefits.

As a stay-at-home mom, Carly Goddard knew she didn’t qualify for the federal benefit, so she didn’t even apply.

She said she was shocked when she started getting email alerts from the Canada Revenue Agency about her My Service Canada account.

“I logged in and somebody had gone into my account [and] changed my direct deposit information to a completely different bank,” Goddard said Wednesday.

“I had two months approval for the CERB for July and August.”

Goddard is just one of hundreds of Canadians who have been targeted by scammers when it comes to CERB.

The Canadian Anti-Fraud Centre said reports have come in from across Canada over the past few months.

“Between March 6 and June 30, we had 713 reports of identity theft linked to the CERB benefit,” the CAFC’s Jeff Thomson said.

Thomson said he is hearing of various ways the fraud is being carried out. Some people are receiving credit cards or debit cards in the mail that they didn’t apply for and others, like Goddard, have had their accounts compromised.

“It’s very organized, it’s very sophisticated and as individuals, as consumers it’s very difficult to get in front of,” Thomson said.

How to protect yourself

Thomson said Canadians can protect themselves from identity fraud by being extra vigilant with their personal information.

“The key is for individuals is to really protect their information, monitor their accounts,” he said.

If you have already been victimized, he said it’s important you keep track of everything that has transpired.

Goddard said she contacted all of those but has yet to hear back from the CRA.

“[The CRA] says it’s a secure portal,” she said. “And [scammers have] gone in and they’ve accessed government info, and I don’t think the government is going to do anything about it.” 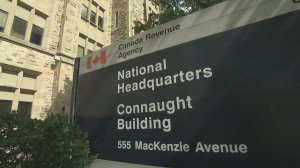 Sylvie Branch with the CRA’s media relations team sent a statement to Global News, saying the CRA is committed to combating identity theft and has taken steps to protect taxpayers from this type of fraud.

“Safeguards are in place to identify and prevent high-risk or potentially suspicious applications from being made,” Branch said.

“As soon as the CRA is notified of an alleged incident of identity fraud, it takes precautionary measures on the client’s account, conducts an in-depth review and contacts the potential victims to inform them of the situation.”

Branch added where appropriate, the CRA works with the RCMP, the CAFC and local police to investigate the incident.

As for financial hardships victims of identity fraud can face, Branch said all confirmed victims will not be held responsible for any money paid out to scammers using their identity and those eligible for CERB will still get it.

The statement also said CRA is prioritizing calls from the victims of fraud and identity theft, ensuring that they are being answered as quickly as possible.

Goddard is grateful she did that, but she’s still concerned about her financial information that is already out there.