No evidence of rockslide in Jasper tour bus crash; ages and hometowns of victims released

RCMP have released the ages and hometowns of the victims of Saturday’s fatal rollover of a bus at the Columbia Icefield in Jasper National Park.

Twenty-seven people – 26 passengers and one driver – were on board the bus when it rolled at around 1 p.m.

Police will not be releasing the identities of the victims, the news release said.

A cause of the crash has still not been determined but, according to the news release, an RCMP collision reconstructionist is on scene and said there is no evidence that a rockslide occurred before the bus crashed.

The president of the company that runs the bus tours said changes will be made to safety protocols, if necessary, after the rollover.

The RCMP said the the snow coach, called an Ice Explorer, will receive a full mechanical inspection.

The off-road bus rolled off the road to the Athabasca Glacier Saturday afternoon and came to rest on a rocky slope, its six huge tires pointed up at the sky.

The bus was righted late Monday evening and was slowly moved back to the road.

In a press release issued earlier on Monday, police said the removal of the vehicle is a “large undertaking due to the challenges involved with the area where it came to rest.”

Police were also worried about protecting the physical integrity of the vehicle as it would need to be examined as part of the investigation.

“Their measurements, their findings, witness statements, accounts of what took place, and that will all form part of our investigation in its entirety to determine whether what happened is something that is a criminal offence, or whether it’s just something that would be dealt with on an Occupational Health and Safety level or something like our Transportation Safety Board.”

Fontaine couldn’t say how long the investigation would take as it’s still in its early stages.

“It’s still a situation where members are still on the ground, still picking up the pieces, if you will, literally on the ground,” she said.

“That will take weeks and months for all of that information to come together in order to answer all of the questions that we have about why this happened and how.”

Fontaine added that everyone who was onboard the bus has been accounted for, so they officials don’t expect to find any more victims once the vehicle is moved.

The RCMP, Occupational Health and Safety and the Transportation Safety Board spent Sunday milling about the vehicle, which slid about 50 metres down a steep embankment coming to rest near the glacier.

It’s unclear how soon it will be removed from its current location but an internal investigation is underway as well.

“We started right away to review what happened, what is our process with our protocol at every step and so we’re doing that internally but we are also working with the external teams to ensure that gets a fulsome review,” said Dave McKenna, the president of the Banff Jasper Collection by Pursuit, which operates the tours and its fleet of 22 vehicles.

The RCMP said the cause of the crash still isn’t known and the snow coach, called an Ice Explorer, will receive a full mechanical inspection.

In a news release on Monday, Canada’s Amalgamated Transit Union said it was “deeply saddened” to hear of the fatal crash.

“We extend our heartfelt condolences to the families of the deceased — and our thoughts and prayers are with all those injured or affected by this terrible accident, including the families and co-workers of our injured operator from ATU Local 1415 — an employee of Brewster Sightseeing Tours,” the statement from president John Di Nino said.

In an interview with Global News, Di Nino said the driver was a “seasoned operator” who remained under medical supervision and care on Monday afternoon.

McKenna confirmed on Sunday the vehicle’s driver was one of the people taken to hospital with injuries but didn’t have an update on the driver’s condition.

“This accident hits home for thousands of transit workers across the country who take passenger safety seriously. Transit professionals across Canada are praying for a speedy recovery for all those injured,” Di Nino said.

The red and white big-wheeled buses regularly take tourists up a rough rocky road onto the Athabasca Glacier in Jasper National Park.

On Sunday, Alberta Heath Services said, of the 24 survivors, 14 had life-threatening head or pelvis injuries. Five others were in serious condition with broken bones and the remaining five suffered minor injuries.

The RCMP is leading the investigation, and while the Alberta Transportation Safety Board has a representative on scene, the chief of staff to Alberta’s minister of transportation said they are deferring to police.

“Our hearts go out to all those affected by this terrible tragedy,” Mark Jacka said. “The government of Alberta does not control backcountry trails in the national parks. Since this is an RCMP investigation it would be inappropriate to comment further.”

McKenna said the Ice Explorers are off-road vehicles and seatbelts are not required. They aren’t allowed on highways and have a top speed of 40 kilometres an hour.

He said once the investigation is complete, Pursuit will implement any changes that might be part of recommendations for things like seatbelts.

“We will wait until the investigation is over and we will listen to all the recommendations and anything we’re required to do.”

Tours have been offered on the glacier since 1969 and the current type of Ice Explorers have been used since the early 1980s but are constantly upgraded. 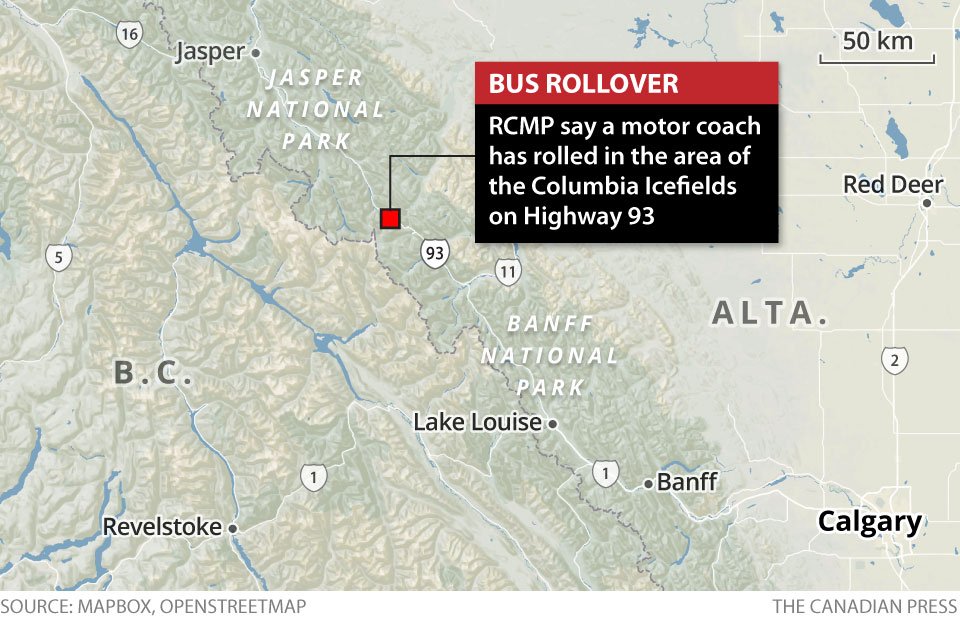 “Our thoughts go out to the families and communities affected by the tragic incident involving a sightseeing bus near Jasper, Alberta,” a statement from Transport Canada said.

“Transport Canada’s Collision Investigations team is in contact with the RCMP to provide support during the investigation, including vehicle inspection and collision reconstruction analysis.”

According to McKenna, the tour company has driven more than 16 million people to the glacier in its history. They say there has never been a major incident like this before.

Highway 93 past the glacier remains open at this time, but police continue to ask members of the public to avoid the area so police and other emergency workers can conduct the investigation.

– With files from Bill Graveland, The Canadian Press