OTTAWA — The Bank of Canada is cutting its key interest target by half a percentage point to 0.25 per cent in an unscheduled cut that brings the overnight target rate to its effective lower bound.

In a statement on its website, the central bank says its decision to lower rates is aimed at cushioning the economic shocks from COVID-19 and a sharp drop in oil prices by easing the cost of borrowing. 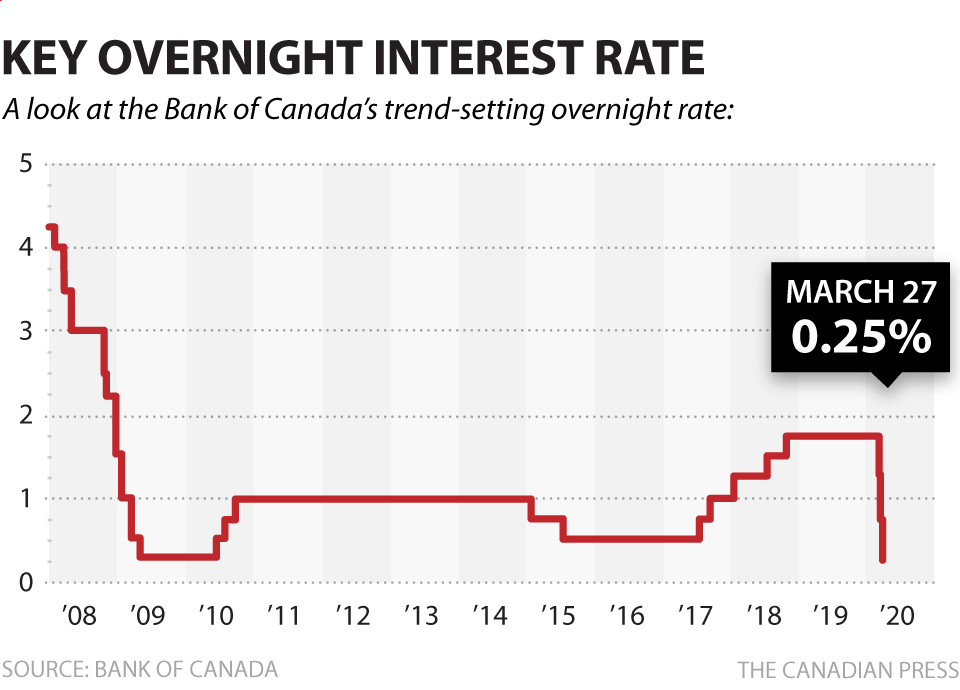 It adds that providing credit in the economy for businesses that need it should help lay the foundation for the economy’s return to normalcy.

The interest rate cut takes the key rate to what the central bank referred to as “its effective lower bound” or the lowest level that rates can be set.

READ MORE: Canadian unemployment could hit 15 per cent amid coronavirus pandemic, deficit to $113B

Bank governor Stephen Poloz is scheduled to discuss the rate cut during a teleconference with reporters this morning.

The central bank is also launching two new programs. One will aim to alleviate strains in short-term funding markets, while the other will see the central bank begin acquiring federal government securities in the secondary market with a minimum of $5 billion per week.

Parliament’s budget watchdog also projected on Friday morning that the federal deficit for the coming fiscal year could be $112.7 billion — a jump of $89.5 billion from previous forecasts.

Parliamentary budget officer Yves Giroux’s report also predicted that the economy will contract by 5.1 per cent this calendar year, the weakest on record since 1962.