Bank of Canada holds rate at 1.75%, says Canada’s ‘resilience’ will be ‘tested’

The Bank of Canada is keeping its key interest rate on hold in a decision that positions the country as an exception among advanced economies already responding to the weakening world economy.

Governor Stephen Poloz’s team says the domestic economy has held up well in many respects and inflation has been close to target. They warn, however, that Canada isn’t immune to the negative effects of slowing global growth.

“Canada’s economy will be increasingly tested as trade conflicts and uncertainty persist,” the central bank said in a statement.

“In considering the appropriate path for monetary policy, the bank will be monitoring the extent to which the global slowdown spreads beyond manufacturing and investment.” 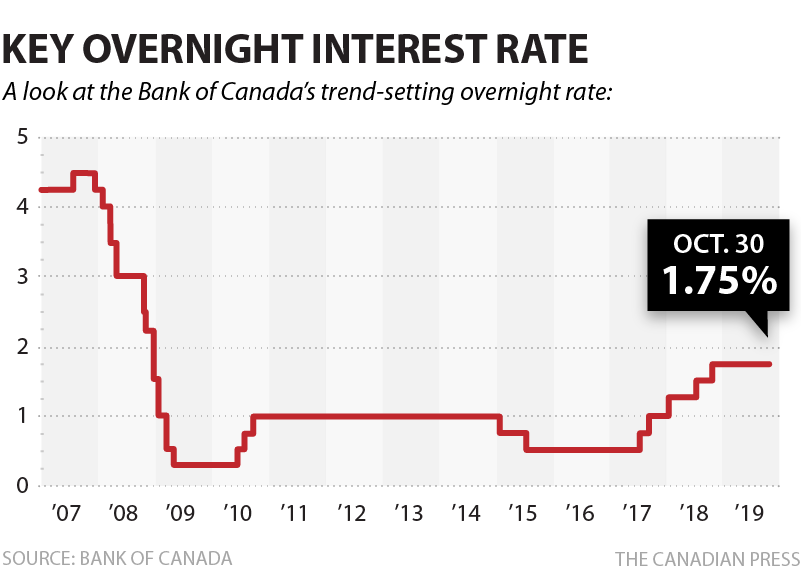 The Bank of Canada’s decision to hold steady makes it stand out among its international peers. It acknowledged Wednesday that dozens of policy-makers around the globe have taken steps to cushion the blow from the weakening world economy. Since the release of its last quarterly update in July, the bank said more than 35 central banks in advanced and emerging economies have eased monetary policy to address fading growth and soft inflation pictures in their countries.

“A growing number of countries have responded with monetary and other policy measures to support their economies,” the bank said.

The U.S. Federal Reserve is widely expected to cut its borrowing rate Wednesday for a third-straight meeting, a move experts say would leave Canada with the highest rate in the industrialized world. It’s a very rare occurrence for the Bank of Canada and the Fed to make rate announcements on the same day.

The Bank of Canada’s status as an outlier will likely increase the pressure on Poloz to adjust his own policy rate in the coming months. To guide its future decisions, the central bank said it will monitor any changes to Canada’s sources of strength, especially consumer spending and housing markets. It also plans to watch for the roll out of expected fiscal support from the federal government and its timing.

READ MORE: No sign of recession yet: U.S. economy grows by 1.9% in the third quarter

The decision to hold the rate at 1.75 per cent was widely expected by markets, and it left the benchmark at the same level it’s been for just over a year. Since the summer, the bank said the global outlook has continued to deteriorate, which has held back business investment, growth and trade. The U.S.-China trade war, and its worldwide fallout, has been the key factor behind the slowdown.

In a separate report Wednesday, the bank predicted global growth in 2019 will dip to its lowest level since the financial crisis. It also released updated domestic projections Wednesday to reflect developments since its last forecast in July.

The bank notes the domestic economy has been resilient in many areas—employment has remained strong, wages have advanced in some regions and housing activity has expanded in most markets.

Over the projection horizon, the bank predicts inflation stay close to its ideal target of two per cent, except for an anticipated temporary dip in 2020 due to waning effects of an earlier jump in energy prices