‘He was saying sorry’: Winnipeg Jets’ Bryan Little gets apology from Patrik Laine

Winnipeg Jets forward Patrik Laine is trying to smooth things over with his teammates.

Earlier in the week, Laine raised some eyebrows during an interview with Finnish reporter Pekka Jalonen, when the restricted free agent insinuated that he wasn’t playing with the best players with the Jets. 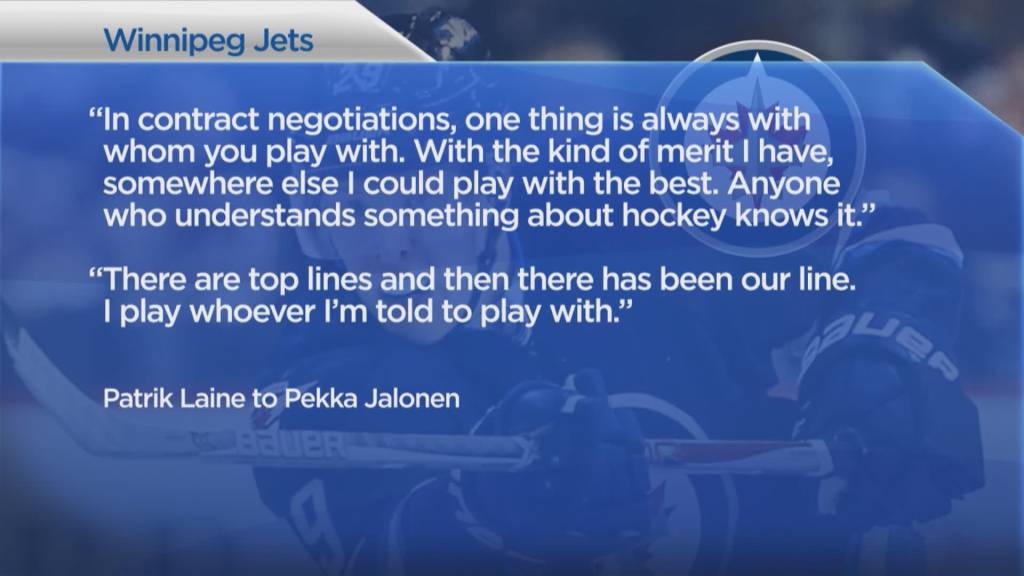 It seemed to be a shot directly at Bryan Little who has centred Laine’s line for much of his three seasons in Winnipeg. After the comments made headlines around the globe, Laine reached out to his teammate to clarify his comments.

“He texted me and asked me to call him, so I called him up,” Little told reporters. “Chatted for a few minutes. He was saying sorry and apologizing for just the way it was interpreted, which I kinda understood before I even talked to him. I know Patty well enough to know that he’s not someone who’s going to purposely say negative things, especially about his teammates. If it’s going to be negative, it’s probably about himself. That’s just the way he is.

“I feel like I know him well enough to know what he is trying to say, and where he was coming from. The fact that he texted me just confirms what kind of guy he is. He’s a great guy.”

Little added that Laine’s contract status and the state of negotiations were not discussed during the call.

🎥"Getting back to the playoffs and getting a chance again is my biggest motivation."

Bryan Little on his offseason, his phone call with Patrik Laine, and much more. pic.twitter.com/u009UetsPN

Jets head coach Paul Maurice was happy to hear Laine reached out to his linemate and is looking forward to putting the entire thing behind them.

“I’m glad it happened,” head coach Paul Maurice said. “Because it should have happened. It’s the right thing to do, and then everybody has a good giggle about it and you move on.”

Little understands why Laine said what he said because Little would also prefer to be playing on the Jets’ top line, just like everybody else.