The Canadian Cancer Society estimates that around 21,000 Canadians will be diagnosed with blood cancers in 2019 — representing about 10 per cent of all cancers.

And those Canadians stand a better chance today than they did 30 years ago. Since the early 1990s, survival rates for the most common blood cancers have increased by nearly 40 per cent, according to a Canadian Cancer Society report published Wednesday.

That means that a few decades ago, a person diagnosed with non-Hodgkin lymphoma had a 49 per cent chance of survival. Now, it’s 68 per cent.

David Mitchell is one of those survivors. He was diagnosed with non-Hodgkin lymphoma in 2015.

“By the time I got the diagnosis, I knew I had cancer,” he said. “I was that sick. I just didn’t know what kind but I knew something was terribly wrong and cancer seemed to be the only thing that sort of fit that whole description.”

His first treatments, chemotherapy followed by radiation, did make him feel better, he said. But at a follow-up appointment in 2016, he received some bad news.

“I could tell right away as soon as my doctor walked in the room. I could tell something was wrong just by her body language,” he said. “I remember her exact words. She just looked at me and she said, ‘It’s not good.’”

The cancer had come back more aggressively than ever and was “pretty much everywhere” in his body, he said. “It was just complete and utter deflation and defeat.”

His medical team started talking about a bone marrow transplant. “I asked the doctor, I said, ‘OK. If I don’t do this treatment, how much time do I have left?’ He told me, he said, ‘You have about three weeks.’”

So, Mitchell had the stem cell transplant. After a long, painful treatment, he was finally declared in remission.

He’s now coming up on his three year “rebirth,” he said, and is back at work as a software developer and is able to exercise regularly. “I’m doing remarkably well.”

The report is “good news,” according to Dr. Claude Perreault, a professor of medicine at the Université de Montréal and an investigator at the Institute for Research in Immunology and Cancer. Cancer survival rates have increased generally, according to the report, but most dramatically among blood cancers. 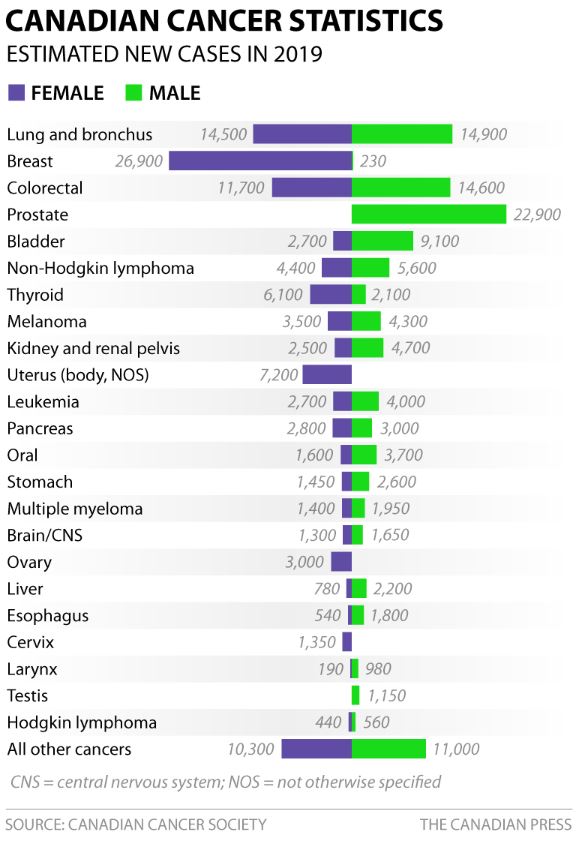 Blood cancers include lymphoma, leukemia and multiple myeloma. It’s an umbrella term, he said, for cancers which affect blood cells. He believes that the increased survival rates for these cancers are due to better treatments.

“There’s nothing we can do to prevent blood cancer. There’s no behaviour, no life habit that has any impact on blood cancer,” he said.

“This improvement is entirely related to treatment.”

Specifically, Perreault and the Canadian Cancer Society say, the improved survival rates for blood cancers are due to the development of “precision medicine”: treatments which are tailored to the patient or the type of cancer they have.

“We’ve realized that cancers are more heterogenous than we thought before, and that it is important to tailor the treatment of every cancer according to its own particular features.”

“Precision medicine really takes cancer treatment to an entirely new and different level by determining treatment based on the unique characteristics of an individual,” said Leah Smith, senior manager of surveillance at the Canadian Cancer Society.

Doctors might scan the cancerous cells of someone who isn’t responding to chemo, Perreault said, and find that they contain a specific molecule. Then, they can give them a drug — rituximab, for example — that targets those cells and only those cells, slowing or stopping their growth.

Or, like Mitchell, doctors might recommend aggressive chemotherapy to kill the cancerous cells, followed by a stem cell transplant to replace cells damaged by the process.

These treatments aren’t always easy. Over the course of his stem cell treatment, Mitchell experienced organ failures, multiple hospitalizations, changes to his hearing and eyesight, and even graft versus host disease — where his newly-transplanted immune cells attacked his own body.

“Honestly, if they told me I ever had to go through it again, I don’t know if I could do it,” he said.

Perreault believes that precision medicine could represent the future of cancer care.

“I believe that when we will look back at classic chemotherapy, we will find that this was a rather primitive way to treat cancer,” he said.

Chemotherapy was first tried on blood cancers, Perreault said, and is now commonly used for other types of cancer.

He expects that precision medicine will similarly become more common in all types of cancer treatment.

“I’m convinced that this will become the standard of care.”

Mitchell hopes that his story, difficult as it was, helps others dealing with their cancer diagnosis.

“I was so sick that the odds of survival didn’t look good,” he said. “So if there’s hope for me, then somebody else can hear this or read this story and think that this is doable. This is totally survivable.”