Adrian Pal, a spokesman for the police, told a news conference that the tourist boat had sunk almost immediately after it collided with a large passenger boat by one of the Danube bridges. Police have launched a criminal investigation into the accident.

There are 21 people still missing.

They said it may take days to lift the boat from the river bed and could not confirm or deny whether there could still be bodies trapped inside the hull. 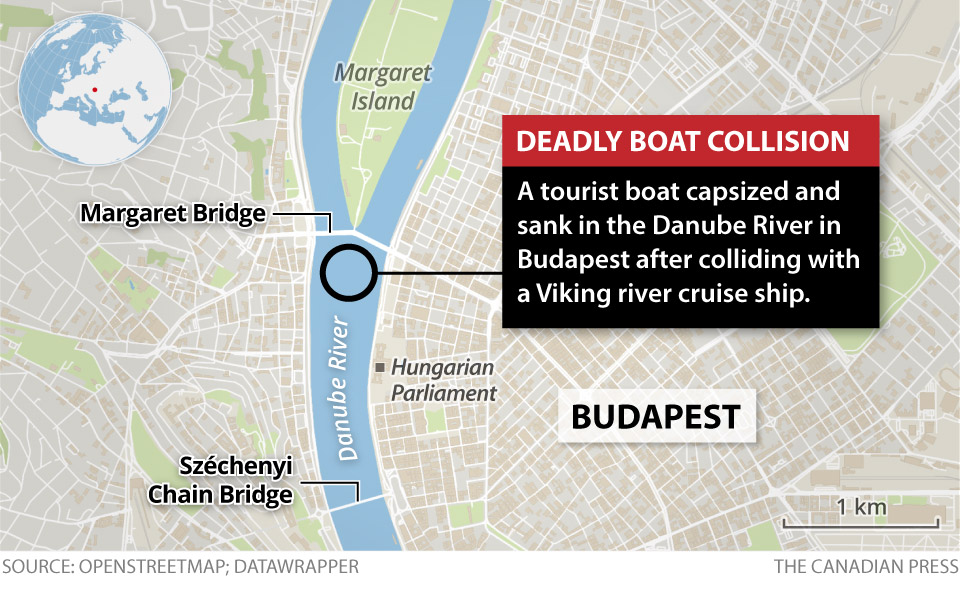 “I am not inclined to say there is no hope, so I would rather say there is a minimal chance (of finding survivors),” Pal Gyorfi, a spokesman of the Hungarian national ambulance service, told the m1 state television station.

“This is not just because of the water temperature, but the strong currents in the river, the vapour above the water surface, as well as the clothes worn by the people who fell in,” he said when asked about the search for the missing.

South Korean President Moon Jae-in said the authorities would work with the Hungarian government to investigate the cause of the accident.

“What’s most important is speed,” Moon said in Seoul.

The foreign ministry said 30 South Korean tourists, including children, three tour guides and two Hungarian crew were on board when the tragedy happened, around 9 p.m.

Seven South Koreans were rescued, seven died, and 19 were among the missing, said Kang Hyung-shik, a foreign ministry official. The seven people rescued were suffering from hypothermia but stable, a Hungarian ambulance spokesman said.

The Hungarian authorities confirmed the death toll. The two Hungarian crew members were both missing.

Rescue officials deployed boats, divers, floodlights and radar following the accident, scouring the river for several kilometres downstream from the site of the accident.

The National Ambulance Service extended its search for survivors and victims downstream from the capital Budapest and was on alert along a section further south.

For a while traffic on the river, an important commercial waterway, was suspended on the entire Hungarian stretch of the Danube south of Budapest. However, the ban is now limited to the immediate area around the accident, Hungarian police said.

Officials have yet to determine what led to the collision between the Mermaid and the 135-meter Viking Sigyn, a 95-room floating hotel of the kind that has multiplied as Danube river cruises gained popularity in recent years.

“We are mobilizing every resource we have to protect human lives,” the Mermaid’s owner, Panorama Deck Ltd., told state media through a spokesman.

The boat – a Soviet model manufactured in 1949 and refurbished in the 1980s – had been in its fleet since 2003, with regular maintenance, it said.

The Sigyn’s operator, Swiss-based Viking Cruises Ltd. , acknowledged its vessel had been involved in an incident.

“There were no injuries to Viking crew or Viking guests. We are cooperating with the authorities as required,” a Viking spokesperson said.