Update: Comments from Defence Minister Harjit Sajjan have been added.

Almost two months ago, on April 16, a soldier finished a 10-day sentence at the military’s prison, or ‘detention barracks,’ in Edmonton and was released.

He was the only person confined at the 25-cell medium-security prison, which costs about $2 million a year to run, and has 26 full-time staff.

Since that time, there has been no inmate at all, the military confirmed this week.

The military’s prison at CFB Edmonton is “vastly underutilized,” says a memo written by its second-in-command.

“The benefits and value of … the Canadian Forces Service Prison and Detention Barracks have come into question recently with the increasing decline of personnel being sentenced to custody,” the prison’s second-in-command, Lt. Stephen Keeble, wrote in a memo last year.

Last May, Global News reported that at that time, the prison had usually been empty in recent years.

WATCH: New information obtained by Global News shows the detention facility at the Edmonton Garrison is empty a lot but costs taxpayers a pretty penny

Part of the detention barracks’ mandate is to keep a critical mass of soldiers who can run a detention facility, she explains. And the military police have no control over how many soldiers — or any soldiers — get sent there as inmates.

Disciplining soldiers by jailing them was common in generations past but is now almost unheard of.

Few soldiers are sentenced to detention today because of changes to the military justice system driven by the Charter of Rights and Freedoms, cultural changes within the military and the military being able to attract a better standard of recruits, according to experts previously interviewed by Global News.

However, maintaining the guards’ skills when inmates are few and far between is a problem.

READ MORE: Canada’s last military prison costs $2M a year. About half the time, it has no prisoners

“Every skill set has a certain level of fade, but we guard against that by having regular and ongoing training,” Hanrahan says.

“When they do training and exercises, we do actually put personnel into the role of detainees so they are continuously using their skill set to a certain facet, not only when we have actual persons at the DB.”

Even a small number of inmates can provide training value to the guards, says Maj. Jean-Marc Mercier.

“You don’t necessarily need that many inmates to go through the maintenance of a capability. Those inmates, even if it’s a few, are better than nothing.”

The Edmonton detention barracks had to set up a detention facility for soldiers in Afghanistan, he points out.

“It’s not a matter of going from 10 facilities to only two because there is not much need. It’s the decision about maintaining the capability, as little as it is, or lose it,” he said.

A court martial hasn’t sentenced a soldier to any form of confinement since November of last year, and that was for five days. Since the beginning of 2018, court-martial records only show three cases where a soldier would have been sent to Edmonton.

In theory, a soldier can also be sent to detention after a summary trial, a simpler procedure held by his commanding officer.

However, in recent years, this has become very rare. In 2017-18, only eight service members in the entire military were sentenced to detention at summary trials, and three of those sentences were suspended. Of the remaining five, not all would necessarily have been sent to Edmonton.

And in some cases, a service member is kicked out of the military and sent to a civilian jail, like a sailor convicted of sexual assault in March 2018.

WATCH: Former MP Laurie Hawn, who has spent his life both in the military and in politics, speaks about the Edmonton detention facility that is empty much of the time but costs taxpayers millions a year

Within living memory, detention was a very common part of military life, at least for junior ranks. Across Canada and overseas, a network of detention barracks existed to support it.

Over time, nearly all closed, and Edmonton became the military’s last detention barracks in a smaller facility than the original one. In the mid-1980s, the Edmonton detention barracks had an average inmate population of 55, but in recent years, it started to empty.

Traditionally, detention combines a jail environment with a very rigid version of military discipline. Inmates are required to clean the facility to an extreme standard, and all their physical movements, to the extent possible, are done as a formal drill. The thinking behind this has been that since the soldier got sent to detention because of a lack of discipline, discipline has to be instilled.

For the tiny number of soldiers who experience detention, it still works this way. The Edmonton detention barracks operate according to rules that have been only minimally updated since at least 1967. A 2011 change removed a punishment of a bread-and-water diet.

(The rules “have not been updated in decades,” Keeble wrote in his memo. “Amendments are urgently required.”)

WATCH: Canada’s auditor general Michael Ferguson said an audit found the Canadian Armed Forces has taken too long in trying military justice cases and that 10 court-martial cases had to be dropped due to delays

Prisoners are forbidden to speak with other inmates, smoke or have visitors until they earn 112 marks, which are given out at a maximum of eight per day, but inmates will earn fewer marks for misbehaviour.

Misbehaviour includes idleness, singing or whistling, “inattention” or “use of blasphemous or other improper language.”

WATCH: Defence Minister Harjit Sajjan defends spending $2 million a year on a military prison that almost nobody is sent to. “There is a need for it,” he says. “The last thing you want is for a situation to come along when you need it and you don’t have the resources.”

“There is a need for it,” he said. “The last thing you want is for a situation to come along when you need it and you don’t have the resources.”

“It’s a positive sign that it’s not being utilized all the time, but having said that, we need a facility like that to make sure that we have all the appropriate resources in place to make sure that our military criminal justice system can function.”

Part of the idea of detention is to protect the investment made in a soldier’s training, which would be lost if he was kicked out of the military, defenders of the practice say.

Hanrahan defends keeping the facility open and staffed, even for one inmate.

“Having the ability to put them into a place like a DB (detention barracks) and afford them the ability to sometimes address the problem that they didn’t have the ability to address in the environment they were in and give them the opportunity to prove that they want to be a member of the Canadian Armed Forces and come back to their organization and actually be able to serve is the right thing to do,” she said.

“If that means that we have to take some money and spend it on doing that for the one person who is successful and is then able to continue to serve their country, understanding that we all make mistakes from time to time, then I see that as a measure of success.”

A military police master corporal, she says, has up to $150,000 invested in their training; it’s better to fix a problem, if that’s possible, than start fresh with a new person.

But it’s hard to measure how successful this approach is on its own terms. Last year, Global News filed an access-to-information request asking how many former Edmonton detention barracks inmates were still in the military or had discharge categories implying good behaviour. The defence department said it had no way of coming up with this information.

The military does not keep track of how released soldiers fare, Hanrahan says.

“You could probably find the data and place it together, but it is not something that is currently being done by the Canadian Armed Forces. There is no mechanism for me to say to you: ‘This person was in the DB and, on release, this person served 25 years,'” she says.

“There is a lack of release tracking for inmates,” Keeble wrote in his memo. “The military system releases with no conditions or followup.”

This was completed late last year, and the military police are working on recommendations to send to the vice-chief of the defence staff, Mercier wrote in an email.

Hanrahan would not discuss its contents in detail.

“What we’re really looking at is changing the strategic document on policy around detention and custody in the Canadian Armed Forces and not specifically the day-to-day operations of the DB itself,” she said. 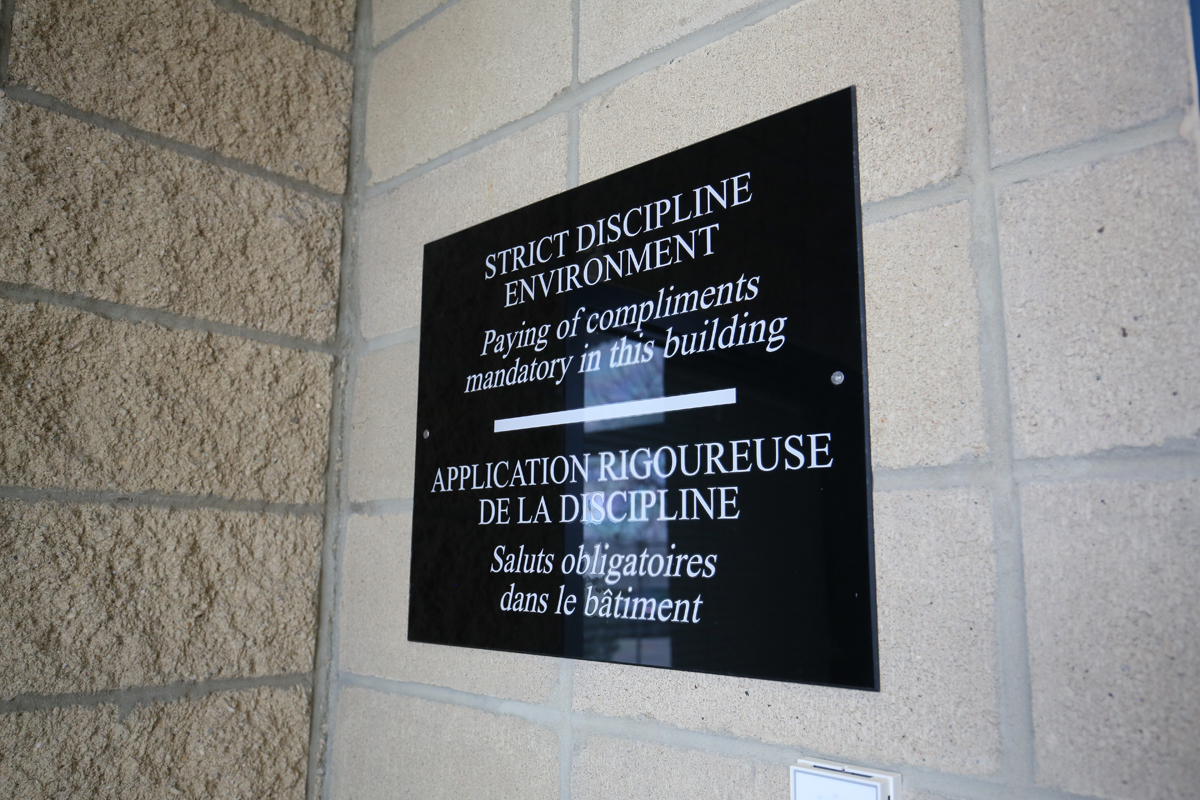 Keeble’s memo was released to Global News under access-to-information laws. The request was originally filed in June of last year; the defence department released the documents eight months after a complaint was filed with the federal information commissioner.

Keeble proposed some changes that might or might not see more soldiers sent to serve time in the Edmonton detention barracks.

The main change would involve all soldiers who have been sentenced to at least seven days of detention anywhere in Canada being sent to Edmonton, as opposed to serving time in cells on local bases. But it’s not clear how many people this would affect since so few soldiers are detained, not just in Edmonton but on any military base.

Across Canada, 23 military bases have cells that could be used for detention. However, these cells have fallen into disuse, Keeble wrote in his memo, making local base commanders reluctant to spend money to update them.

“The local (unit detention rooms) are currently being vastly underutilized, making the cost to upgrade them prohibitive and lack value for the money,” Keeble wrote.

“Cells vary by furnishings, hygiene amenities and cleanliness across the CAF.”

Keeble argued that closing cells across the country would save money, but a more senior officer questioned this, pointing out that soldiers who once would have been confined locally would have to be flown to Edmonton with an escort.

“You’ll have to show the math on this one, it’s a bit of a leap with no background information,” wrote Maj. Stuart Lawson, an MP officer at defence headquarters in Ottawa. “Does your estimate include travel arrangements?”

The Edmonton detention barracks are also used to train soldiers to be “custodians” who are in charge of detention. Custodians are trained to deal with problems like drug withdrawal and suicide attempts by the people they are confining. Keeble proposed that all military police take the custodian course taught in Edmonton.

The detention barracks continues to run only one custodian course a year, Mercier wrote.

WATCH: Defence Minister Harjit Sajjan defended the operation of a military prison that was found to be empty about half the time

Conservative defence critic James Bezan did not respond to a request for comment.

In response to a separate access-to-information request, the Department of National Defence said it had no record of other government agencies asking to use the facility.