Statistics Canada says real gross domestic product grew 0.3 per cent in January as the economy bounced back after contracting in November and December. Economists on average had expected no growth for the month, according to Thomson Reuters Eikon.

The growth came as 18 of 20 industrial sectors moved higher. Goods-producing industries increased 0.6 per cent, led by growth in manufacturing and construction. The manufacturing sector rose 1.5 per cent in January, while the construction sector grew 1.9 per cent, its best showing since July 2013.

Services-producing industries rose 0.2 per cent as all but one sector increased.

The positive economic performance came despite a 3.1 per cent contraction in the mining and oil-and-gas sector that was at least in part due to the mandatory oil production curtailments in Alberta.

“Oil production was the hole in a surprisingly high-calorie doughnut for the Canadian economy,” CIBC economist Avery Shenfeld quipped in a note to clients shortly after the release.

But even the oil industry can expect sunnier days ahead, as the output cuts are set to be gradually scaled back and oil producers will benefit from higher market prices, said RBC economist Josh Nye.

The rough patch the economy went through in late 2018 and early 2019 might be over, Nye concluded. 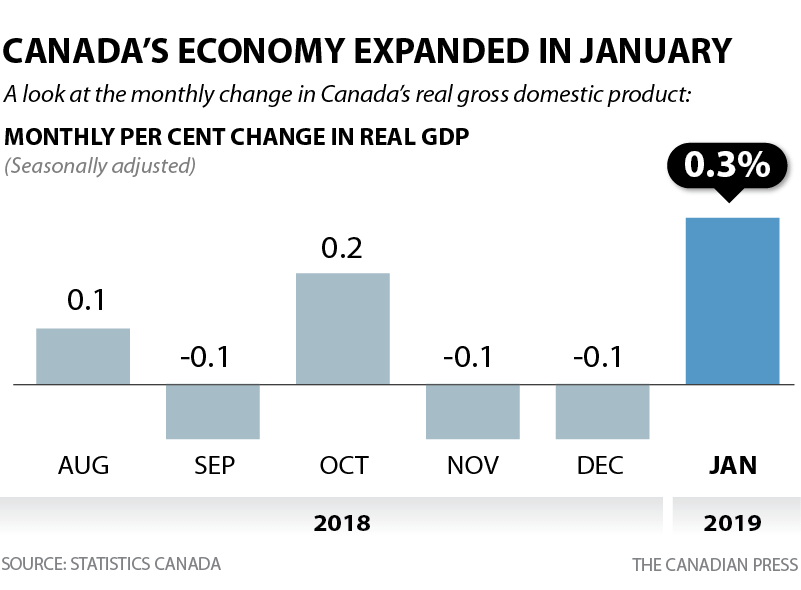