A Vermont man, involved in a long-running spat with local officials, erected a giant sculpture of the middle finger saluting city council with the one-finger wave.

Ted Pelkey had the sculpture erected next to a highway in the town of Westford earlier this month.

“It’s intended for the people who run the town of Westford,” Pelkey told WCAX-TV.

According to the news station, Pelkey has been in a long-running dispute with the town over red tape that’s preventing him from developing on his property. The man wants to move his recycling business and a truck repair shop from another town to his property to cut down on expenses. Pelkey claims city staff have a personal grudge against him and are creating red tape.

“In my eyes, if somebody tells you they hate you right up front, it’s a hate crime,” Pelkey said to WCAX-TV. 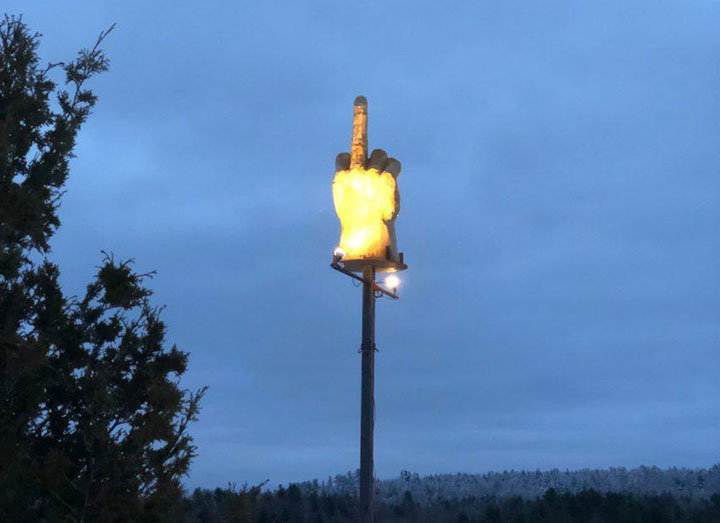 “I’m hoping we can get it through to the people in the town of Westford to have a really long look at the people who are running their town,” Pelkey said.

Westford residents are a bit perplexed by the monumental “eff you.”

“It’s very odd,” Deanna Wilcox said. “And certainly not the love that I hope everybody is spreading in the world today that we really need.”

“It’s somebody’s expression and it didn’t hurt anybody as far as I know except for maybe somebody’s feelings,” another resident said.

City staff told the news station, since the sculpture is considered public art, their hands are tied and they’re stuck with the middle finger.