A Canadian Forces plane is heading to the storm-battered Îles-de-la-Madeleine Friday carrying supplies and personnel to help residents who were cut off from the rest of the province when a fierce winter storm struck Wednesday.

Public Safety Minister Ralph Goodale tweeted that a Hercules aircraft is en route with up to 250 Canadian Forces members available to provide assistance. It is expected to land Friday afternoon after stops in Montreal and Quebec City to pick up equipment and personnel.

Quebec Public Security Minister Geneviève Guilbault said Thursday the emergency was beyond the provincial government’s capacity to respond so it was necessary to turn to Ottawa.

On Friday morning, Guilbault told reporters in Quebec City that a plane had landed on the island late Thursday evening to do reconnaissance work.

”There are about 100 people who are helping over there to get back the power and to help having all the information regarding what is needed in terms of people and material,” she said.

Heavy winds knocked out Internet and phone service, but late Thursday, Quebec civil security said telecommunications had been partly restored. The network remained fragile and residents were asked to limit Internet use.

The Sûreté du Québec (SQ) has been going door-to-door to check on those without power. Sgt. Claude Doiron said a fire burned a low-cost housing complex to the ground Thursday morning, leaving about 40 people homeless. No one was seriously injured. 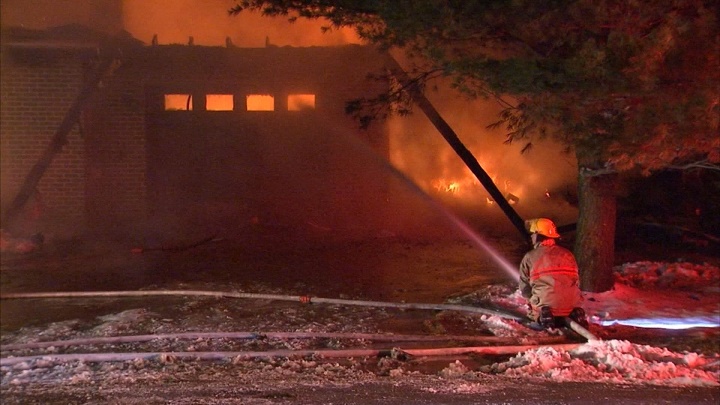 Around 40 people are homeless after a fire tore through a residential building on the Îles-de-la-Madeleine on Thursday. In the aftermath of the storm, residents of the islands were able to call each other on landlines, but couldn’t contact the mainland because of damage to underwater cables. Winds of up to 130 km/h and rough seas battered the islands Wednesday, with high winds stretching into Thursday.

Guilbault said it wasn’t the first time the underwater cables were damaged, adding the government was in discussions with Hydro-Quebec to find a permanent solution, including the possibility of installing fibre optic cables.

However, Guilbualt maintained the top priority was to manage the current crisis.

“My priority now is the safety and health of the people over there,” she said.