‘The streets are for everyone’: renowned Spanish street artist almost finished 6-storey mural in Edmonton

With his bright, six-storey mural nearing completion in the heart of Edmonton’s Old Strathcona neighbourhood, the notable Spanish street artist behind the urban painting says there’s a reason he decided to come to Alberta’s capital.

“I like to go to small cities because it’s like the beginning of a change and I feel that and I feel happy because of that,” Okuda San Miguel said on Monday.

“A lot of people come to see me [and say] thanks.”
Story continues below advertisement

San Miguel, who lives in Madrid, started the project on Saturday and it was nearly complete as of Monday afternoon.

“It’s like a mix between geometric language with different patterns,” San Miguel said of the mural and of his approach in general. “Digital parts with organic parts… something like that.”

The idea to put a mural up near the northwest corner of Whyte Avenue and Gateway Boulevard was that of local restaurateur Michael Maxxis. He started a crowdfunding campaign in May to bring the skilled and sought-after Spanish spray-paint artist to Edmonton.

Watch below: On July 15, 2018, Albert Delitala filed this report about a massive mural being painted in Edmonton’s Old Strathcona.

San Miguel, who will take a day or two to enjoy the great outdoors in the Edmonton area before he leaves, is most famous for murals in larger cities like Paris, where he painted his massive and modern take on Leonardo da Vinci’s Mona Lisa in the city’s 13th district, or in New York City where he gained attention for his painting called “Soho Dog.”

Just before coming to Alberta, San Miguel completed a large mural using a 23-storey residential building in Toronto as his canvas and “Equilibrium” has since lit up social media.

“The streets are for everyone,” San Miguel said Monday as he spoke about why he’s inspired to work more on pieces that appear outside buildings rather than within them.

“I think art has to be in the streets too because we have too many distractions in the street like branding, like logos… people need art.”

San Miguel said the Edmonton mural, for which Alberta is supposed to serve as the inspiration, should last forever although some colours may fade somewhat from exposure to sunlight.

Story continues below advertisement
“Here [in Edmonton], it’s cold normally. Maybe the weather will… work for the wall,” he said with a laugh.

San Miguel has appreciated having onlookers while he works, including some people who asked for him to pose for pictures with them.

“I think it’s the most important [part of] working in the street. You know… the feedback with the people. Art has to be for everyone not only the people that go to the museums, you know?”

San Miguel said he will head to Madrid for a break after the Old Strathcona mural is finished before he heads to Poland for his next project. He said he has projects lined up all the way until 2019 but plans to take a holiday with his mother at the beach in the next few months.

According to a tweet from El Cortez, one of Maxxis’ restaurants — and whose patio neighbours San Miguel’s mural — an unveiling party is set to take place later this week. 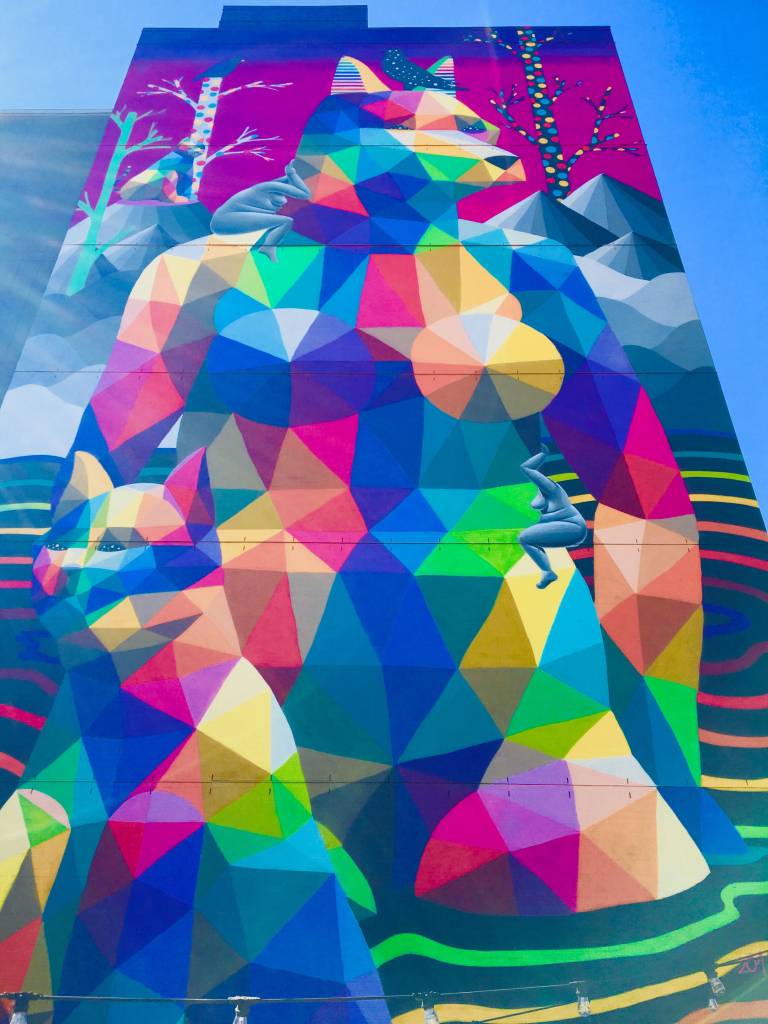 –With files from 630 CHED’s Morgan Black