California fires: What are the ‘Diablo winds’ fanning the flames in wine country?

Authorities in Northern California found themselves scrambling to get local residents out of the way of fast-moving wildfires this weekend, and are blaming a particular meteorological phenomenon called “Diablo winds” for helping to spread over a dozen blazes in Napa and Sonoma counties.

The most dangerous wildfires have sprung up in and around the area just north of San Francisco. Tens of thousands of people have been evacuated from the area, with 15 confirmed fatalities and over 100 reported injuries as of Tuesday morning.

At least 1,500 homes and businesses have been destroyed, and California Gov. Jerry Brown has declared a state of emergency.

The speed and intensity of the fires are indeed unusual. They are being fanned by winds that are hot, dry and strong.

Named for the state’s Mount Diablo, they originate inland in Utah and Nevada. 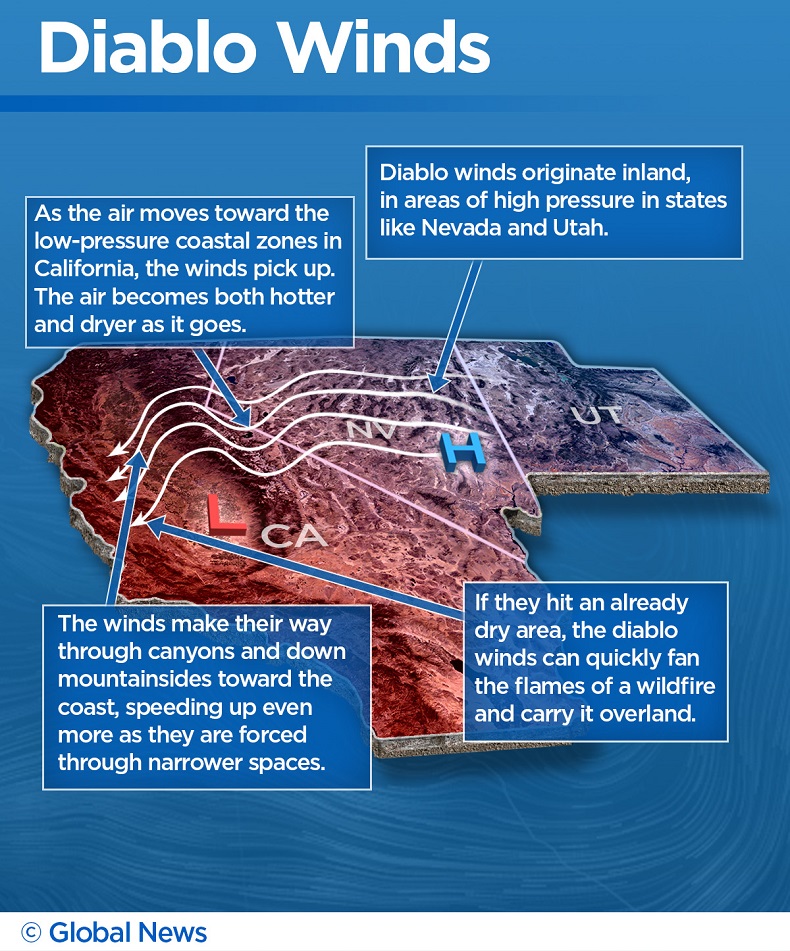 How the winds work

As air moves from areas of high pressure in those states toward the low-pressure zones along California’s coast, it travels over mountain ranges, heating up, picking up speed and losing humidity as it funnels down steep slopes. Diablo winds are typically strongest atop mountain ridges.

When these powerful winds (some gusting to 115 kilometres per hour) blew into Napa and Sonoma counties this weekend, they encountered the low humidity and dried-out vegetation that are typical of the end of California’s hot summer season.

It was a recipe for disaster, with even the tiniest spark able to grow rapidly into an inferno. Within hours, over a dozen fires were burning. While the Diablo winds didn’t necessarily start the fires, they certainly made them worse.

Meanwhile, in Southern California, a Santa Ana wind “event” blew through on Monday and into Tuesday. So far this fall, however, the most destructive wildfires have been in the northern part of the state.