British applications to emigrate to Canada rose after Brexit vote

The rise in requests for permanent residency started in the fall of 2016, a few months after the vote.

But even if they started the morning after the vote, a perfectly organized applicant would take at least five or six weeks to get the paperwork together once they’d figured out what to do, says Toronto-based immigration lawyer Guidy Mamann.

“It’s about a month and a half before you have all the documents that you need to submit an application,” he explains.

“Let’s assume they decided that very minute.  They have to do a language test. The language tests are being booked in about two weeks, and it takes about three weeks to get the results. So for five weeks, you can’t do anything. You also have to get your credentials evaluated. That usually takes a couple of weeks.”

The spike in applications started in September of 2016 and grew from that point through the fall.

The British vote to leave the EU, on June 23 of last year, caught many by surprise — including some who had been arguing for it for years. Prime minister David Cameron promptly resigned, the pound went into freefall, and it wasn’t clear exactly what was supposed to happen next.

More than a year later, with a two-year timeline for Brexit ticking down, not much has become clearer.

Dozens of important issues, from trade to immigration to environmental policy, have to be solved on a pitilessly short schedule. British negotiators in Brussels last week seemed painfully underprepared. The status of EU citizens in Britain — and British citizens in the EU — is open to question.

WATCH: Britain’s Brexit minister David Davis has said the UK could still walk away from negotiations with the European Union without a deal.

If that wasn’t enough to worry about, Brexit has exposed old fault lines in Northern Ireland and gave Scottish separatists — who lost a 2014 referendum, but not by a large margin — hope that Brexit will give them the votes they need to reject union with England and embrace the EU.

Conservative Prime Minister Teresa May, who called an early election in June to give her a strong mandate to bring in Brexit, instead ended up with a minority government.

With all that uncertainty, it isn’t surprising that thousands of people in Britain have been looking for a Plan B, ideally, one that gives them the same mobility rights within Europe that they have now. British demand for Irish passports has risen sharply, as have applications for German citizenship. Other EU countries, from Finland to Italy, saw similar patterns.

Brexit also sparked a rise in Britons wanting to move to New Zealand.

“We’re seeing a few more than maybe before,” Mamann says. “We’re not seeing a huge number — nothing like the Americans.”

READ: New immigration rules make it easier for Americans to work and stay in Canada

British Google searches for “emigrate to Canada” hit a five-year high the week of the Brexit referendum: 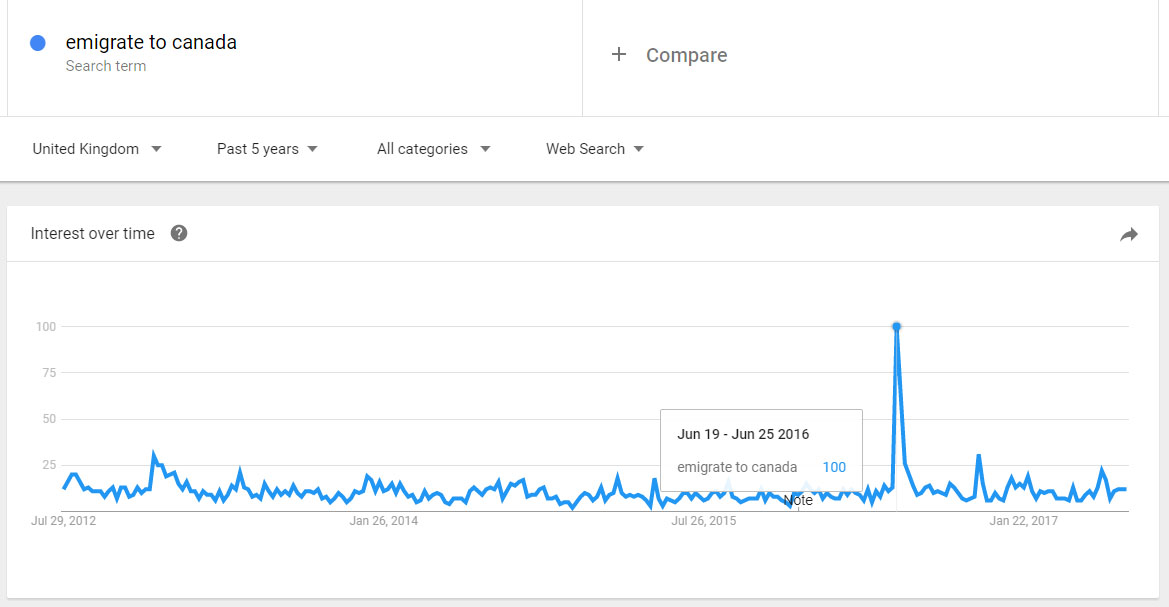 Interest was strongest in Scotland, where most voters opposed Brexit.

Canadian citizenship applications from British citizens have risen since the Brexit vote, but in that case, the trend is more ambiguous, since it started well before the 2016 referendum. These applications would have been filed by British-born permanent residents in Canada who had become eligible for citizenship through living here for the required period.