As a firestorm rages in Washington, D.C., over President Donald Trump’s firing of FBI Director James Comey — which Trump denies is in any way connected to the ongoing FBI investigation into possible collusion between his presidential campaign and Russia — Trump felt the need to reignite his long-simmering feud with Rosie O’Donnell in an attempt to make his point.

With phrases like “Watergate” and “obstruction of justice” increasingly being used to describe Comey’s controversial firing, Trump has been trying to justify his move by taking to Twitter. He’s been retweeting Democrats who feel the former FBI director should have been dumped over his handling of Hillary Clinton’s emails in the days leading up to the 2016 election.

One of these tweets came from O’Donnell, with Trump citing her December 2016 tweet to “Fire Comey.”

We finally agree on something Rosie. https://t.co/BSP5F3PgbZ

According to Jesse Rodriguez, senior producer on MSNBC’s Morning Joe, this led O’Donnell to send a text to Nicolle Wallace, telling her former View co-host:

.@Rosie just texted @NicolleDWallace and told her "It's a clear indication of his seriously declining mental health.. this is no joke" https://t.co/BOPuTnSOdb

Shortly thereafter, O’Donnell issued a few tweets of her own, including a photo of a hammerhead shark in the ocean in front of Trump’s Mar-a-Lago resort in Florida, writing that the shark had been swimming next to her boat for 10 minutes.

@NicoleWallace11 – he shoulda been fired when he threw the election – we see his motives now – TRUMP IS DONE 4 good ❤ pic.twitter.com/U8AMng5Z05

But she wasn’t done yet. She then sent Trump a direct reply to his earlier tweet.

O’Donnell had the final say with an insulting tweet about Trump’s neck. (You can see the uncensored version here.) 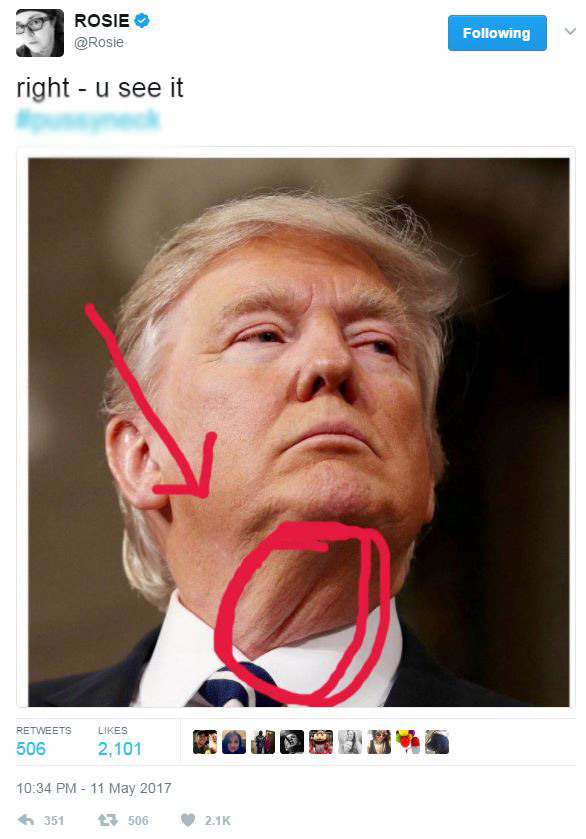 The Trump-O’Donnell feud began in 2006, and has seen Trump call the former daytime talk-show queen such charming epithets as “fat pig,” a “total loser” and “crude, rude, obnoxious and dumb,” while O’Donnell has assailed him as a “bully” and “snake-oil salesman.”

— With files from Chris Jancelewicz