How the Fort McMurray fire is creating its own weather

The wildfires raging in Fort McMurray have been so intense, they’ve created their own weather system.

“It was creating its own high winds yesterday and even lightning was coming from the smoke clouds it created,” Chad Morrison of Alberta Forestry told a briefing in Edmonton on Thursday.

While it may seem incredible that a fire can create its own weather, it’s not unusual. The same effects can be seen around volcanic eruptions.

It works much in the same way any cloud forms. It’s just extremely localized.

Intense heat from the ground rises up, carries water vapour and — in the case of fires — ash, and forms a cloud, similar to the type of cloud you might see on a summer day. Those puffy cotton ball-like clouds are called cumulus. A cumulus cloud born out of fire is called a pyrocumulus cloud (“pyro” coming from Greek, which means fire).

If convective forces — the transfer of heat at different altitudes — are strong enough, you might notice an anvil-shaped cloud. On normal stormy days, these clouds are called cumulonimbus. In the case of severe fires, they are called pyrocumulonimbus. These clouds can reach altitudes of about 30,000 feet or higher.

3:27 Fort McMurray wildfire: A timeline of a disaster

Though they don’t produce any significant rain, they can produce lightning, which, of course, can exacerbate the situation in wildfires. 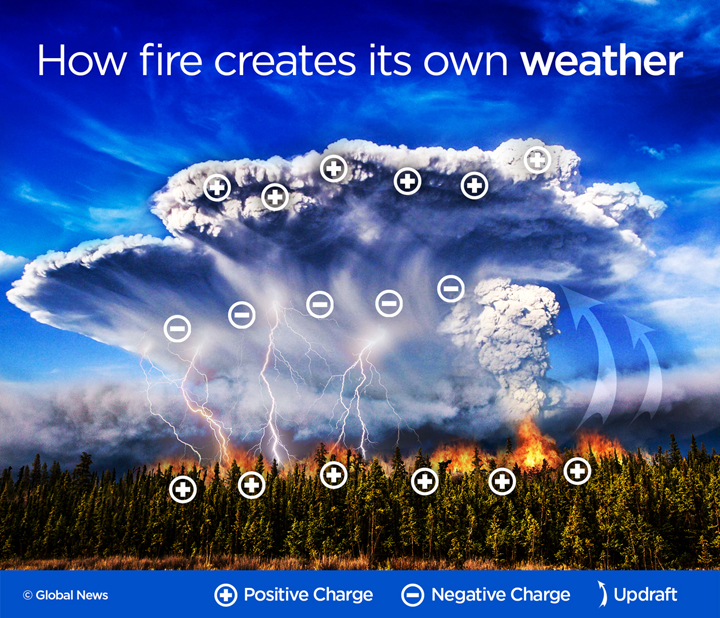 The same can occur in the case of intense wildfires.

As well as creating lightning, fires can produce high winds, as updrafts of wind (and downdrafts) occur.

Both lightning and gusts of wind can make fighting these fires a challenge for crews trying to gain control of a blaze.

—with files from The Associated Press