WEST KELOWNA — Police and the B.C. Coroners Service are continuing their investigation into the discovery of a body late Wednesday morning.

RCMP received a call just before 11:30 a.m. of a body found inside a vehicle in the area of Bear Creek Road, about two kilometres past Parkinson Road.

Cst. Jesse O’Donaghey says the West Kelowna RCMP General Investigative Section (GIS) has taken over this investigation and police are treating the man’s death as suspicious in nature.

“Police are still in the early stages of this investigation. West Kelowna RCMP GIS continues to investigate the circumstances surrounding this death with the BC Coroners Service, and will provide updated information as it becomes available,” says O’Donaghey.

Nearby resident Justin Lohse says when he left for work on Tuesday night around 10:30, the vehicle wasn’t there but upon his return at 7:30 a.m., he noticed the abandoned Jeep.

“Usually in the morning there’s people walking but it just looked funny, it just stood out,” says Lohse referring to the vehicle.

“It looked suspicious, it really did. At that peninsula there, there’s nowhere to talk, so it’s kind of odd that it’s parked there.” 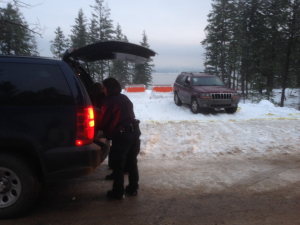