Liberals picking up momentum in Ontario, B.C., according to latest seat projections

The Liberal party has gained momentum, according to the latest seat projections from the Laurier Institute for the Study of Public Opinion and Policy (LISPOP), and is coming within striking distance of forming the official Opposition.

The Liberals have gained 17 seats, mostly in Ontario and Quebec, for a total of 103 since last week’s numbers. Liberal gains come at the expense of both the NDP and Conservatives, which have been hit hard, losing four seats, and 13 seats, respectively.

The NDP has had a comfortable lead in seat projections since its provincial counterpart swept to power in Alberta. And since then, not much changed – until now.

“All of a sudden things have moved more dramatically than ever,” Barry Kay, a politics professor at Wilfrid Laurier University said in an interview Tuesday.

“The fact is a whole lot of things have happened, mostly bad for the Conservatives. The Duffy trial, the economic statistics technically showing us in a recession… and now most recently the immigration issue.”

Kay noted, however, that it’s nearly impossible to quantify exactly how much any of the issues affected numbers, and noted that often times it can take weeks before an event is reflected in public opinion. Meaning, how PeeGate affected the election remains to be seen.

READ MORE: Haven’t paid attention to the election campaign? Here’s what you missed

The changes are most notable, Kay said, in Ontario and British Columbia. A handful of Ontario ridings that were leaning Conservative – including York-centre, Hamilton West, London West, Glengarry, Brampton Centre, Markham Stouffville, Brampton North and Oakville – are now leaning Liberal. 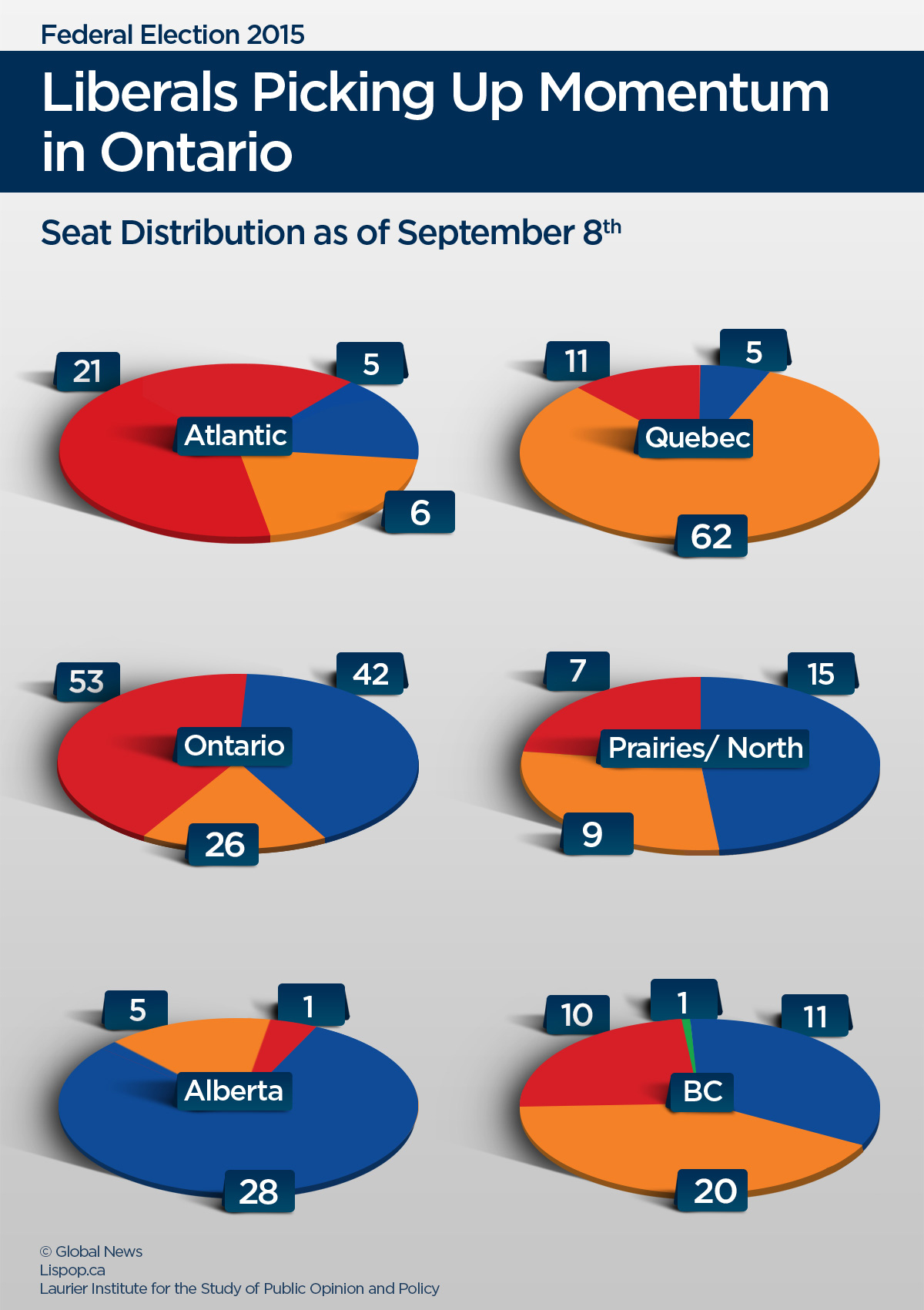 “The changes for the Conservatives are most notable,” Kay said. “[They’re] down four points in B.C., and down, actually only 2 points in Ontario, but the Liberals are up.”
Story continues below advertisement

The slight drop for the Conservatives in British Columbia has actually helped the NDP as the two parties are fighting for ridings where the Liberals aren’t competitive. 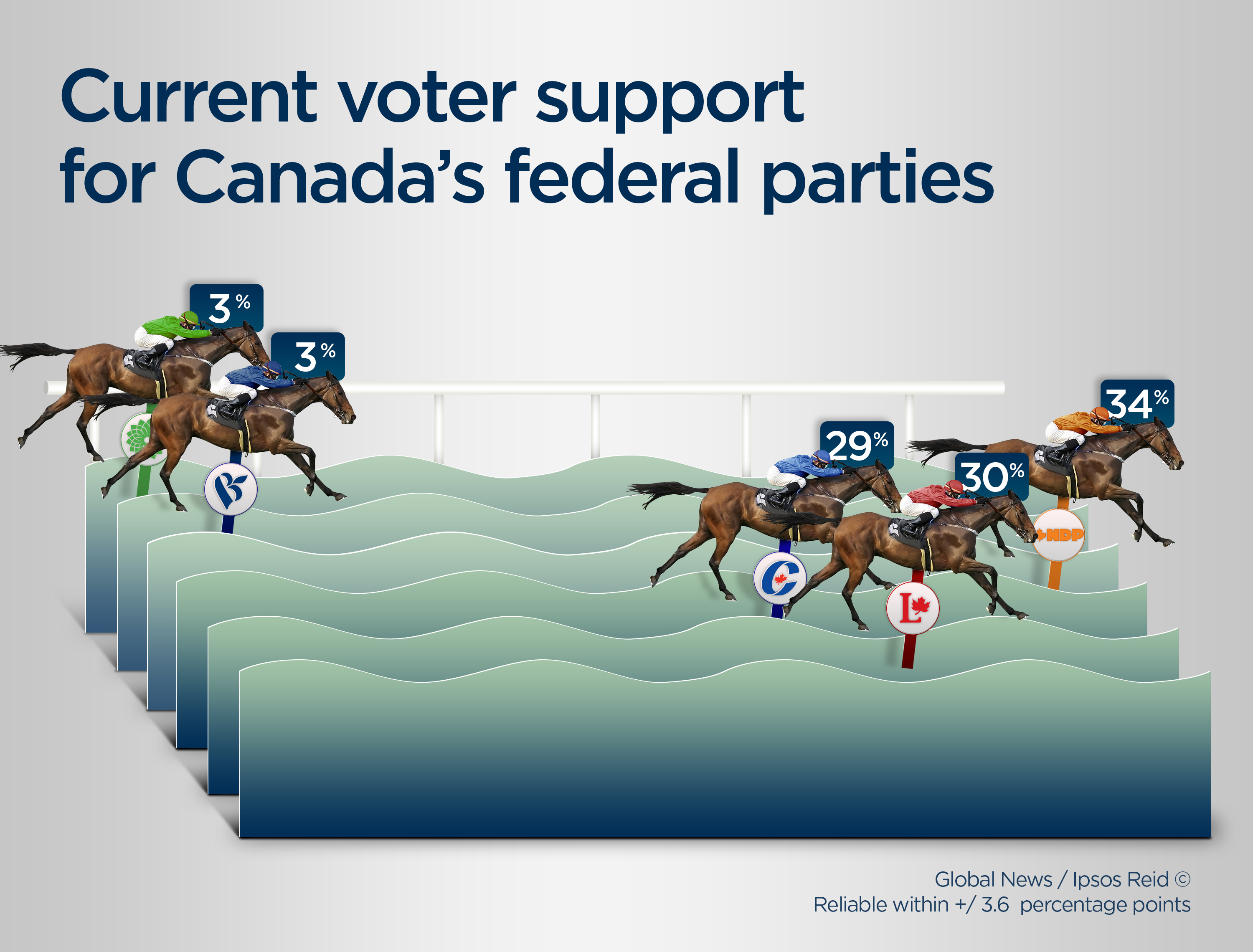 An Ipsos poll conducted on behalf of Global News and released Tuesday suggests popular support for the three parties has barely moved over the last two weeks.

The NDP remains in first place among decided voters across the country, according to Ipsos, edging up a single percentage point to 34 per cent support. The Liberals and Tories haven’t changed with 30 per cent, and 29 per cent support, respectively.

Each party has a region of Canada where its base is solidified and not likely to budge; the Liberals have Atlantic Canada, the Tories have Alberta and the Prairies, and the NDP own Quebec.

Story continues below advertisement
“Where the real play is at… [is] in Ontario and British Columbia,” John Wright, CEO of Ipsos said during an interview Tuesday. “These are the two areas that are going to produce either a minority or a majority government for somebody.”

The NDP trails – though not by much – in Ontario with 28 per cent support, while the Liberals and Tories are statistically tied at 36 per cent, and 35 per cent, respectively.

British Columbia too is a tight race.  The NDP leads with 37 per cent, but not too far ahead of the Liberals’ 31 per cent and the Conservatives 28 per cent. The Green Party, which only holds one seat in the House of Commons, trails at 4 per cent.

“It’s really going to come down to who owns that 905 [area]  around the Toronto area that is still in play, and who ends up the breadbasket winner in British Columbia,” Wright said.
» 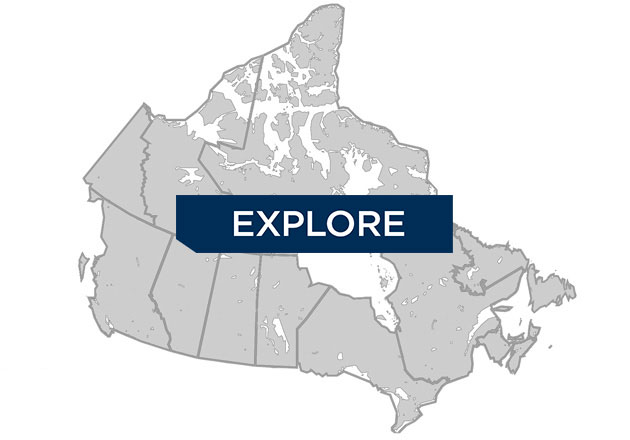 Ipsos polling since the beginning of the campaign period has shown a strong desire among voters for a new governing party in Ottawa. Now, 71 per cent of respondents say they want a change in the House of Commons.

“You’re dealing with only about 30 per cent who in fact want to keep the government the way it is, and you need another seven points to form any sort of government,” Wright said.

READ MORE: You can vote right now, if you want to – what you need to know

Prior to the election, roughly 40 per cent of people wanted to see the Harper government re-elected.

In order to combat the falling number, Wright says he expects to see a barrage of advertising from the Conservatives focused on two things; defining Mulcair and the haunting spectre of a coalition government.

“One of the things that’s really critical about campaigning is defining the opposition as quickly as you can, and that’s what the conservatives done to Mr. Trudeau, but what they haven’t done is define Mr. Mulcair,” Wright said.

“What the Conservatives are going to have to do is portray any form, other than a majority government or working minority headed by the Conservatives, as actually scary to the economy and to everything else in this country,” he added.

Exclusive Global News Ipsos polls are protected by copyright. The information and/or data may only be rebroadcast or republished with full and proper credit and attribution to “Global News Ipsos Reid.” This poll was conducted between September 4 and September 8, with a sample of 949 Canadians from Ipsos’ online panel and is accurate to within 3.6 percentage points 19 times out of 20.