RED HEAD — Hundreds of New Brunswickers and some people from neighbouring provinces came out Saturday to protest the construction of the Energy East Pipeline.

“This is a united thing that we need to stop so we don’t have the mess that just doesn’t go away,” said Rebecca Roberts.

Many at the march said they’re worried about the impact the pipeline could have on the Bay of Fundy, especially the possibility of spills or leaks and an increase in tanker traffic.

“TransCanada’s Energy East Pipeline project is locking us in. It locks us in to 60 years of more expanded fossil fuel development,” said Matt Abbott of the Fundy Baykeeper. “There’s a real recognition that we need to transition towards something else.” 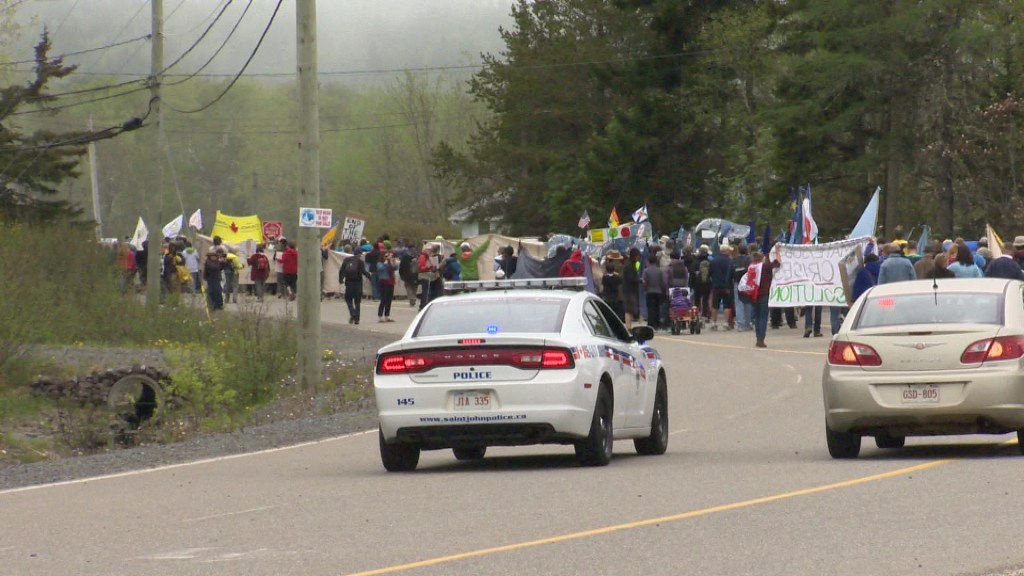 But a spokesperson for TransCanada said he wants to ensure New Brunswickers have all the information.

“People have a right to their opinion, that’s why we are there, engaged with the community, answering questions about this project,” said Tim Duboyce.

Duboyce said TransCanada has set up a community liaison group in the Red Head Road area, specifically for residents who are directly impacted by the project.

“So that information can be shared, so we can hear what their concerns are, for anybody that comes forward wanting information from us, we are more than willing to provide it.”

Two months ago, TransCanada announced it was no longer moving forward in Cacouna, Quebec as a location of an oil terminal for the pipeline. A report by a federal government wildlife committee concluded that the beluga whales in the St. Lawrence River are endangered.

A few people from Cacouna travelled to the march in Red Head to support the cause in N.B.

But Martin Poirier said he’s still worried about what’s next in Quebec.

“We wait for the next position where TransCanada will choose a new place. They consider Quebec for Baie-des-Sables, another town in Quebec. For us, it’s impossible to accept this kind of project,” he said.

TransCanada is going over environmental and economic studies to decide on another terminal location in Quebec. The company is hoping to have a renewed plan sometime in the next year.