By Colleen Barry The Associated Press

MILAN – Shape and colour engaged designers on the second day of Milan Fashion Week of womenswear previews for next autumn and winter, featuring shows by Fendi, Max Mara, Just Cavalli and Prada.

Some highlights from Thursday’s shows:

FROM ANIMAL PRINTS TO BAUHAUS

Roberto Cavalli is in the final stages of negotiating the sale of a majority stake in his fashion, and his CEO kept a watchful eye as the creative power behind the Cavalli and Just Cavalli brands held court with reporters during fashion week.

The brands earlier in the day reported a 4.2 per cent increase in revenues in 2014, to 209.4 million euros, and with the sale closing to the Clessidra private equity fund the goal was to stay on message. Keep the focus on fashion, not financials.

It is perhaps the serious nature of the business that had the Just Cavalli label for the younger crowd taking cues from the German Bauhaus architectural movement, rather than Cavalli’s usual omnipresent animal prints. There were geometrical references in prints and necklaces. But the collection also had a 1970s feel with a strong rust-based colour palate and some hippie, Bohemian print long dresses, jumpsuits and blouses with ruffled sleeves. 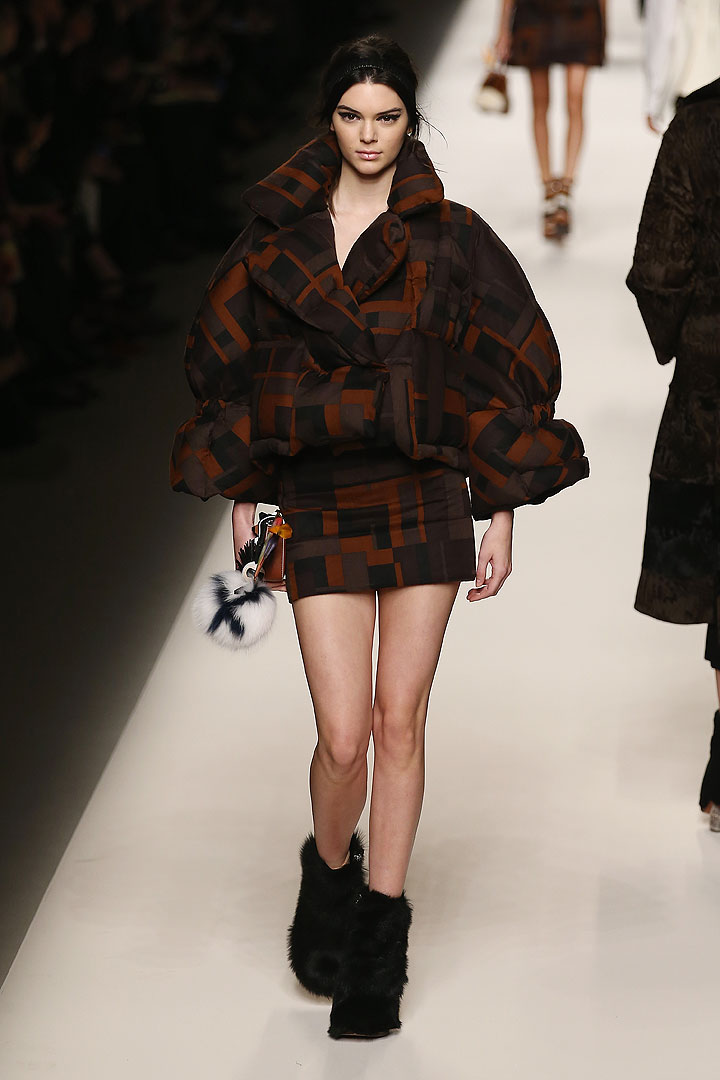 Kendall Jenner is keeping up her runway streak, strutting for Fendi in one of Lagerfeld’s puffy parkas with a matching mini-skirt and black fur boots. The half-sister of Kim Kardashian, who made her New York runway debut just a year ago, is becoming one of the most recognizable faces on the circuit.

In New York, she walked eight major runway shows, including for Oscar de la Renta in an elegant tulle and organza gown. In London last week, she took it a bit easier, modeling a gothic look for the brand Giles but also seeing how the other half lives from the front row of Topshop Unique.

Miuccia Prada explored cliches of beauty in her looks for next winter.

Her woman is a Technicolor 1950s housewife, perfectly dressed and coiffed, serving up neat trays of pink or green canapes, like the ones that greeted visitors to Prada’s show.

Her double-breasted pantsuit, in a spongy, stretch fabric, had a Claymation effect — part of Prada’s ploy to explore the space between the real and the fake, like two parallel universes.

For Prada the exploration wasn’t just about teasing out the irony of what is accepted as beautiful, as she sprinkled the looks with oversized sequins, bows and fur. It also becomes an indictment of the growing dissonance with the selves we project, or as she puts it, “the reality of us, and all the flatness as you invent a reality that doesn’t exist.”

The most merchandisable pieces in of the collection were a series of ostrich skin dresses and skirts – but Prada couldn’t leave well enough alone. She mutated that circular ostrich pattern into a wavy print on a vinyl-like material – pairing ostrich with what the designer cheekily called its genetic mutation.

Bold contrasting colours contributed to the unreality of it all – olive set against aquamarine, pink against flesh tones, and camel with grey and princess pink.

The looks were finished with long opera gloves, the kind that landed Alma Clooney under the glare of the fashion police at the Golden Globes, or a shorter, more utilitarian model. Shoes included boots featuring a wavy rubbery sole in contrasting colour.