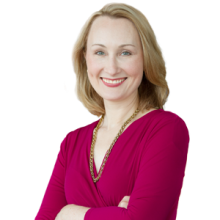 Tasha Kheiriddin is one of Canada’s best-known writers and broadcasters.

Kheiriddin — who is fluently bilingual — has produced, hosted, and appeared on radio and TV programs across the country, while also penning weekly columns for both the National Post newspaper and the online publication ipolitics.ca.

Tasha’s work has been recognized with the Justicia Award for Excellence in Journalism from the Canadian Bar Association in 2003, Toastmasters’ Communicator of the Year Award in 2004, and the Economic Education Prize from the Montreal Economic Institute in 2012. In 2017 she was named one of Canada’s Top 100 Most Powerful Women by the WXN Network.

In addition to her career in media, Tasha worked in law, politics, advocacy, and academia. Born in Montreal, Tasha graduated from McGill University in 1993. She practised litigation in Quebec before moving to Toronto to work as legislative assistant to the Attorney General of Ontario. During her university years, she also worked as a political assistant to Progressive Conservative cabinet ministers Barbara MacDougall and Bernard Valcourt, and served as President of the Progressive Conservative Youth Federation of Canada. In 2004 she became the Ontario director for the Canadian Taxpayers Federation, later returning to Quebec to serve as vice-president of the Montreal Economic Institute and then Quebec director of the Fraser Institute, while lecturing on conservative politics at McGill University.

For the past seven years Tasha has made her home in the GTA, first in Whitby, Ontario, and now in downtown Toronto. In addition to politics, she is passionate about children’s issues, including child care, education and kids with special needs. Mother of one grade-schooler and step-mother of two university students, she has volunteered with Resources for Exceptional Children and Youth, serving families and children with autism and mental health challenges in Durham region. She is currently a board member with the Society for Quality Education, which advocates for school choice and the improvement of public education, and a member of the Council on Youth Electoral Engagement, which works to encourage young people to engage in the political process.