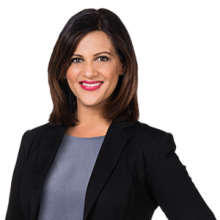 Sonia has a B.A. (Hons) Humanities and 17 years of broadcast experience as an anchor on both radio and television. After hosting shows on commercial radio and television, she was handpicked in 1996 by the BBC to anchor shows on both a regional and national level. Highlights include covering the 9/11 terror attacks in New York, and extensive coverage of both the Afghanistan and Iraq invasions by the U.K. and U.S. She has interviewed many politicians and world leaders, as well as those from the world of business and entertainment.

Sonia is described as an incredibly versatile anchor having hosted entertainment shows, politics and chat shows as well as the BBC’s flagship Breakfast Show. During her time, she won many awards for ‘Best Presenter’ and ‘Best Female Presenter’ in the U.K. Sonia has also emceed many corporate events, fashion shows, charity shows and live events.

Sonia moved to Vancouver in 2011, leaving the BBC behind for love in B.C.! She is married and has a three-year-old daughter. After a short career break to enjoy motherhood, Sonia returned to the screen making her debut on Canadian television as an anchor for CBC Vancouver. A few months later, she joined Global BC.

When she is not working, Sonia enjoys spending quality time with her husband, daughter and friends. She loves exploring British Columbia, going boating, hanging out on the beach and going for walks along the Seawall. Her favourite local trip so far has been going on road trip from Vancouver to Osoyoos for a wine tour!

Quite a few domestic flights added to the list today - leaving from Vancouver on Feb. 15. trib.al/NP8jA7n

RT @JenPalmaGlobal: #traffic #snow is melting quickly along the main roads of the Metro area. Hwy1 moving well in Surrey and Langley. ⁦@Glo…

JUST IN: B.C. has reported 395 new cases of #COVID19 on Thursday, along with 10 additional deaths. trib.al/HgpWXED